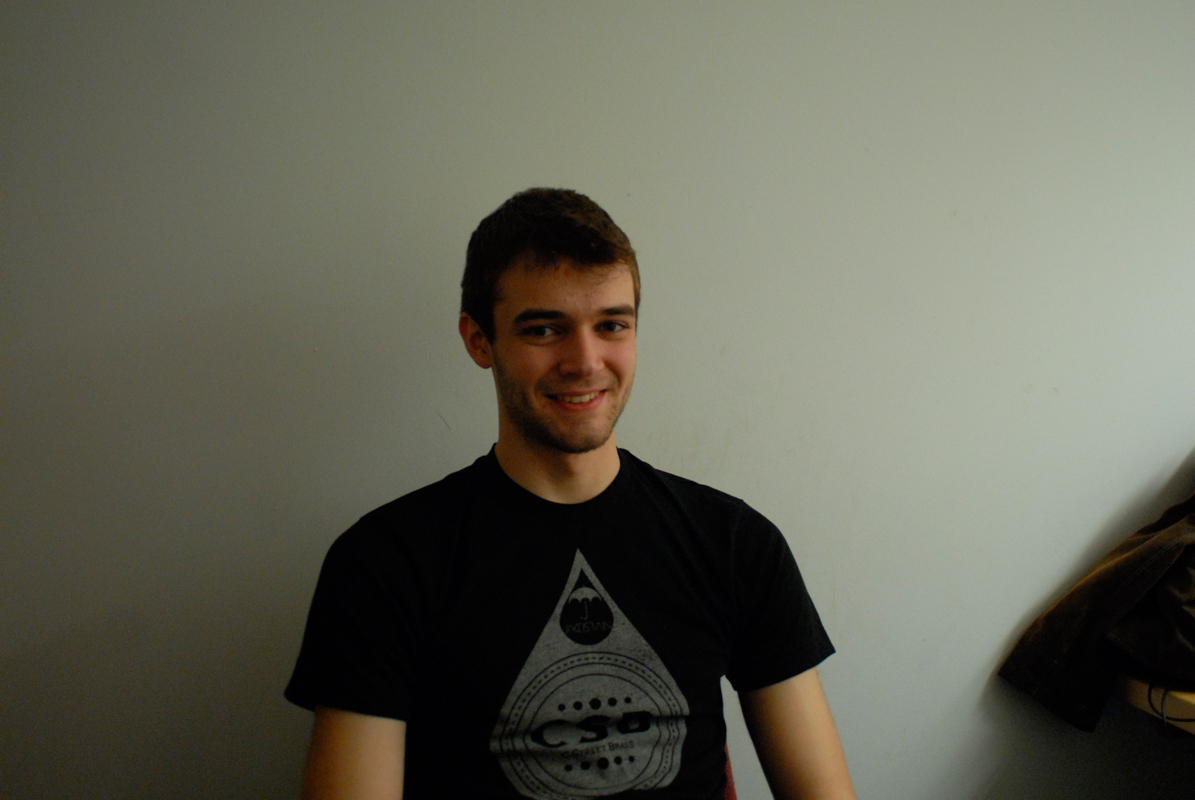 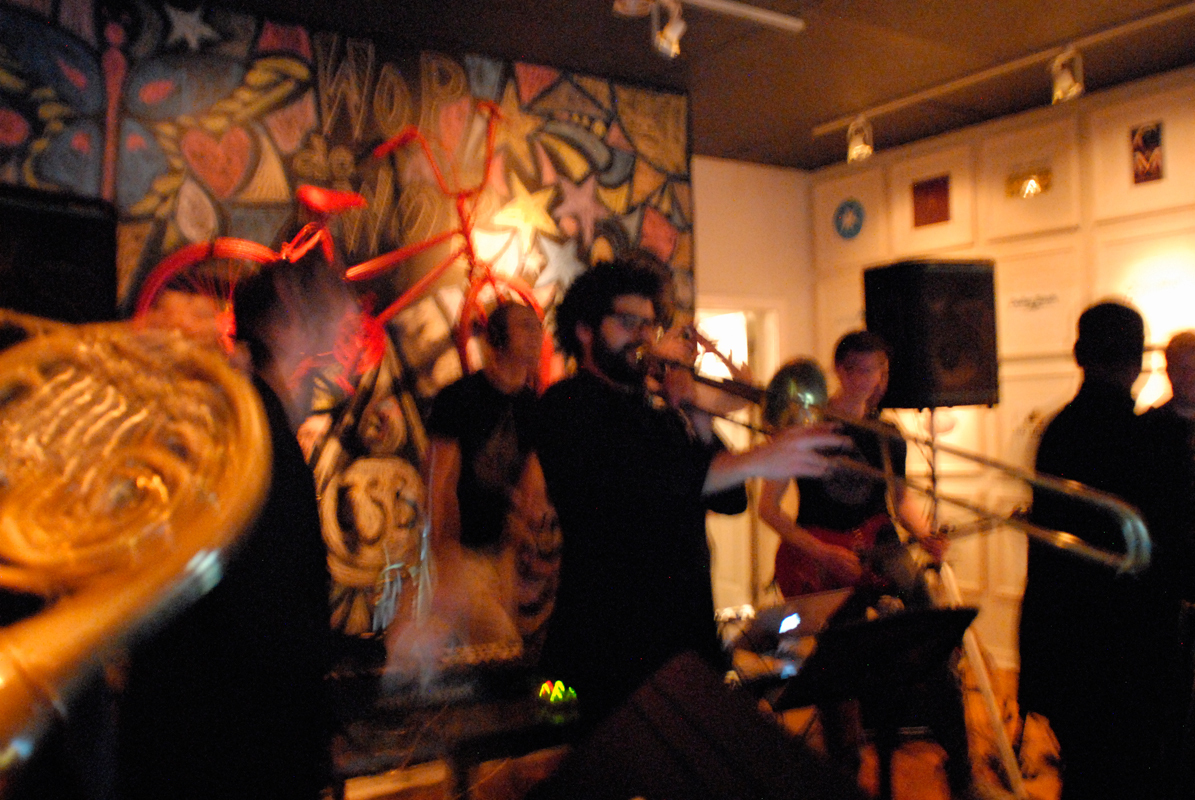 Jakeisrain and C Street Brass celebrated the release of their debut EP, _Wop de Wop_, with a well-attended release party and performance at the South Side Chamber of Commerce last Saturday night. (credit: Chloe Thompson/) 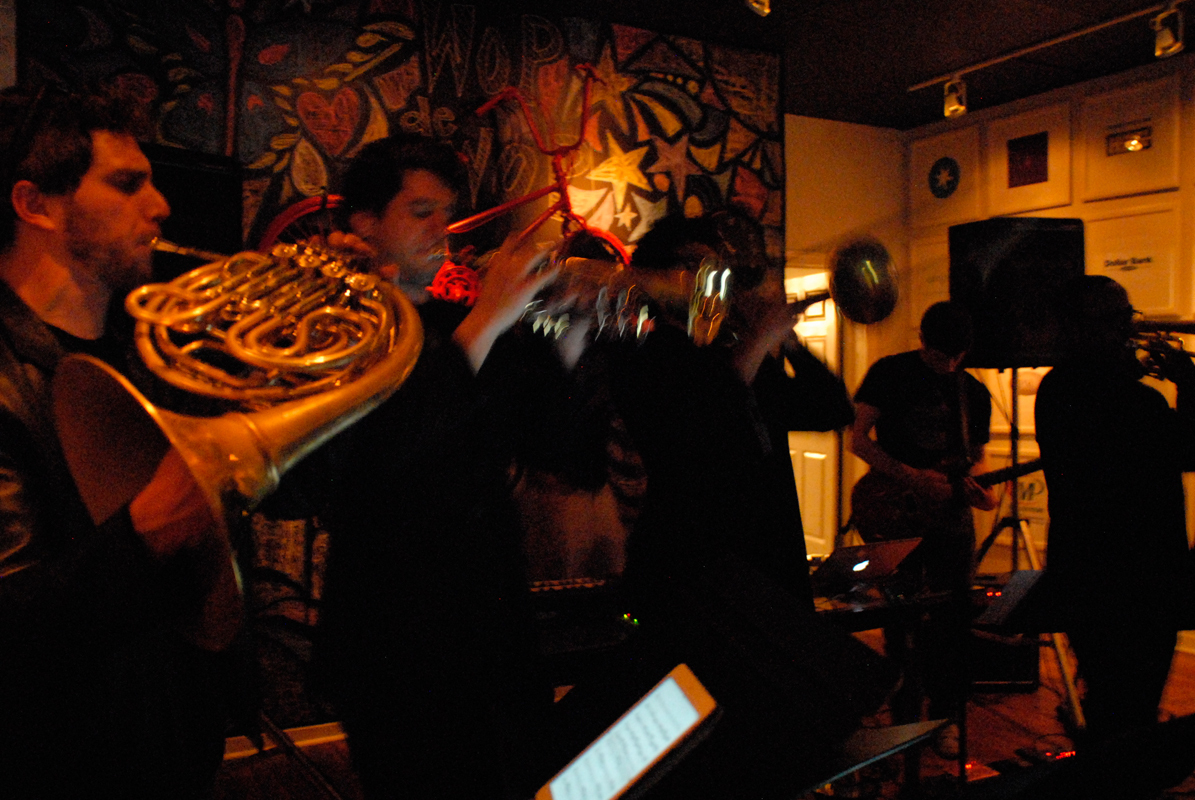 They held a launch party at the South Side Chamber of Commerce on East Carson Street on Saturday night. The venue was a small and warm space with huge, colorful photographs spanning three of the walls and bright chalk drawings on the fourth wall behind the band. The air of intimacy was heightened by the assorted members of C Street Brass and Berntsen moving through the room before the show started, grinning and chatting with members of the crowd. The C Street Brass musicians radiated good humor and buoyancy as they wandered about. “We’re really excited to bring what we do to a wider audience,” Anderson said at the launch party. Bilal added “We’re really excited to be getting a bunch of friends out of their environment, out of the box, doing something different.”

“Different” exactly describes the collaboration between C Street Brass and Jakeisrain. All of C Street’s musicians are trained in a conservatory, while Berntsen is primarily an electronic musician, with some background in classical piano. Together, they make brass electronic music, which is a relatively new genre. In an interview before the release, Berntsen explained that because electronic brass is so unique, even covers of other songs require arranging by the group, and the band has to write most of its own music.

The music at the launch party started off with only Bernsten as disc jockey. The crowd clustered close to the stage, some dancing, but mostly milling around. At around 9:30 p.m., Bilal got on a megaphone and announced the official arrival of C Street Brass.

From the minute the whole group was on stage together, the energy in the room came to a head. The mild feeling of restlessness vanished as Sky High by Big Gigantic, washed over the crowd.

Before the concert, Colby said via phone, “We were talking about doing something that had never really been done before. No one’s doing it with as tight a setup as we would be. I’m not saying we’re the best, but when you got five people who have classically trained together for a long time, certain things become possible.”

In this case, one of those certain things was the absolutely mind-blowing set that C Street Brass and Jakeisrain played. The quintet members seamlessly complemented each other, interweaving their own unique sound with the heavier electronic music to create a perfect blend of styles. The crowd’s dancing picked up almost immediately as the band played; the set combined high-energy, gorgeous brass sounds over a framework of low, rhythmic bass, which made for perfect dancing music. During the early songs, Nadelson took off with a phenomenal trumpet solo, his hands blurring over the valves of his instrument. Colby’s trombone and Bilal’s bass trombone played off each other beautifully.

All the musicians were true performers, flashing wide smiles into the crowd and dancing along with the music as they played. From the back of the stage, Berntsen threw himself wholeheartedly into dancing along, while
the C Street Brass musicians actually danced with some of the audience members, as they were less than two feet apart. About halfway through the set, Bilal handed his bass trombone off to a girl in the crowd, saying “I don’t want to hold it anymore,” swigged at someone else’s beer, then grabbed his instrument back in time to hit his note.

The EP itself is a unique spread of music. According to Colby, the tracks “all really represent different parts of electronic music right now.”

“‘Wop de Wop’ is really fun to play,” he said. “‘Move More’ is my personal favorite.” All four tracks on the EP present a unique blend of brass and electronic. “Move More” falls more on the brassy side of that scale, with an anthem-like quality to it, and triphop kind of beat. “Not a Normal Trombone” is the heaviest-sounding track, with a dubstep feel. The notes fall heavily, with a trappy sort of sound. “Cookies N Cream” sounds more electronic, with a faster pace and higher energy. The faster electronic bits mix well with the brass, which slow the piece down a little. “Wop de Wop” blends brass and electronic the most effectively on this EP, as it plays a Big Sean sample over a deep bass drop.

After they cycled through the four songs on the EP, the band switched to other original work, and some electronic-brass covers. One of the most notable covers was of the Beatles’ “Because,” which sounded simultaneously familiar and strange, as the brass played with the classic sound. During one of their four encore calls, they played an arrangement with elements of Muse’s “Time is Running Out.”

The EP was available for free in hard copy at the launch party, and is also available for free download on the Internet. “I really like the idea of doing things for free. It’s really important to me that people hear the music,” Berntsen said. “Right now, there’s no way you can actually sell music and expect to get a profit. There are so many platforms, it’s impossible to govern. So it’s more important, I think, to get it in as many people’s ears as possible, so then they pay for your live show. So that’s kind of our philosophy for right now. It’s gonna be a free show, we’re giving out free beer — we just want people to be there. I’m really excited to get things going.” Berntsen was not alone in his enthusiasm to “get things going” — all the band members expressed how happy they were to reveal their work. “We’re just pumped to show people what we’re doing,” Colby said.

The genuine enthusiasm that radiated off of all the band members during the show is one quality that makes this collaboration effort so unique. These musicians are all deeply talented, and are putting their varied skills together to create something unique, new, and incredible. And this EP is only the pairing’s first release.