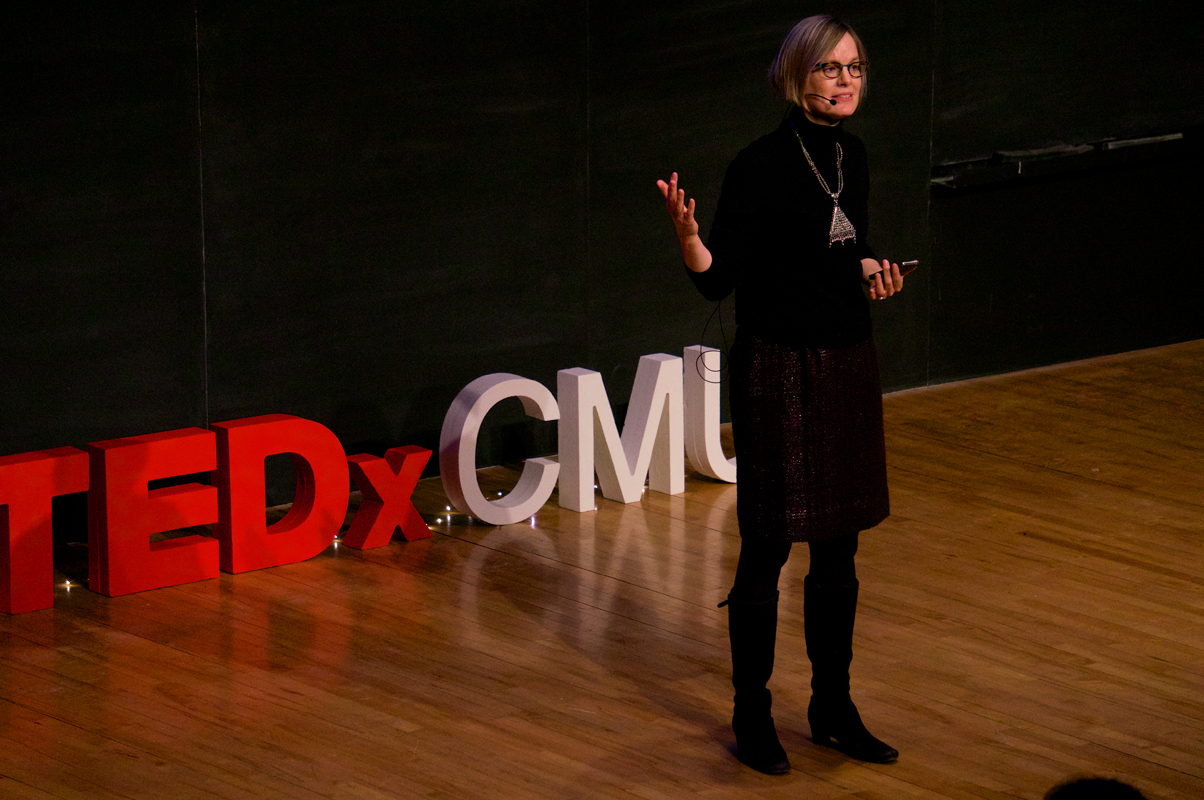 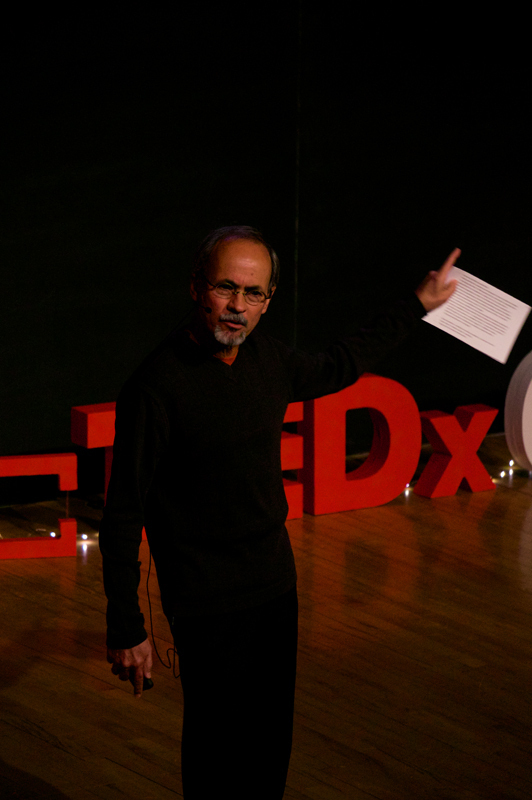 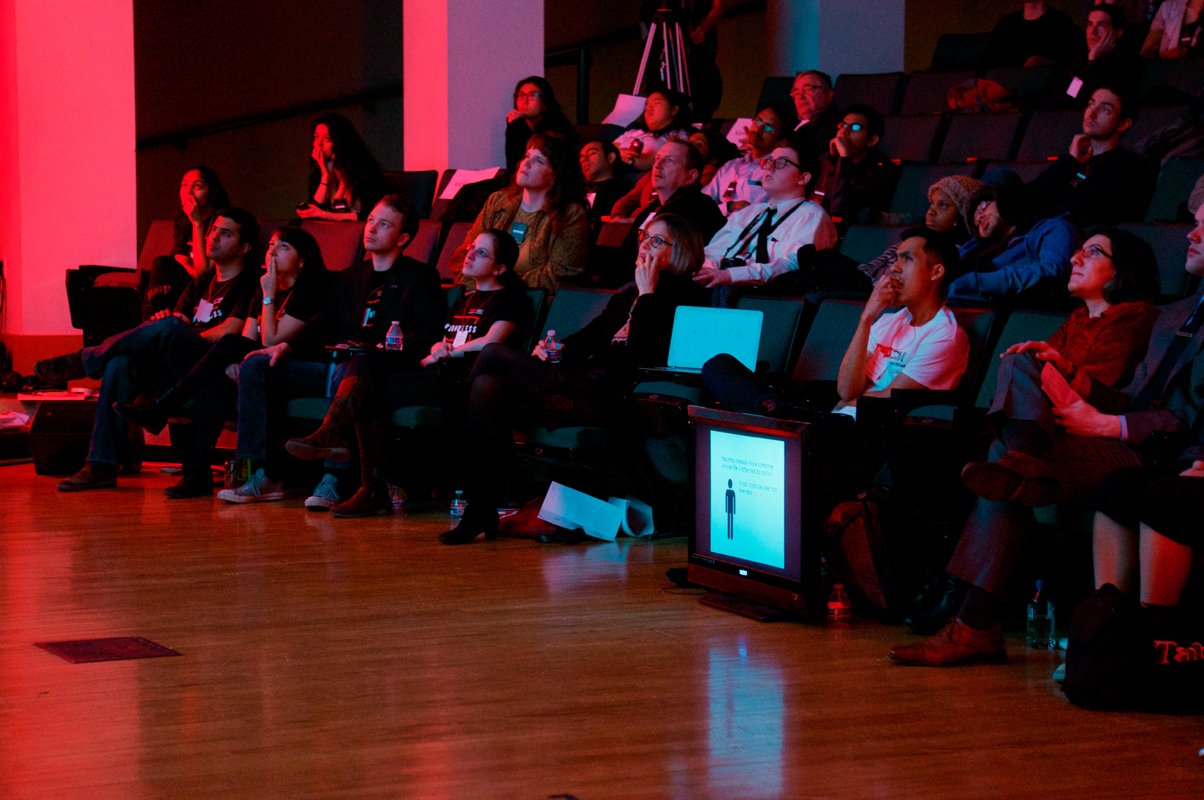 TEDxCMU held its annual conference at Carnegie Mellon University, where 11 speakers gave 10–15 minute presentations on a variety of topics. Junior decision science major Nadyli Nuñez serves as president of TEDxCMU and was in charge of this year’s conference. “TEDxCMU is an independently organized event,” Nuñez said. “TED created TEDx to make an amazing impact for people. We offer TED talks here for free, and we are into the free sharing of knowledge.”

When asked about the speakers at this year’s conference, Nuñez said, “We bring in speakers from different fields, and this year we were looking at some of the local talent.” Faculty members, students, alumni, and individuals from Pittsburgh were among those who spoke.

Nuñez is in her third year with TEDxCMU — which is itself in its sixth year at Carnegie Mellon. She began preparing for the 2014 conference in April 2013. “It’s been a journey for our team, as well, and it’s been amazing and inspiring,” she said.

Thirteen people at Carnegie Mellon, both undergraduate and graduate students, were responsible for organizing the event. According to the TEDxCMU website, these students were placed into design, logistics, finance, publicity, and speaker teams.

Together, the different teams combined their efforts to plan and set up the event. “I’ve been lucky to be with an amazing team,” Nuñez said.

Students interested in attending were asked to register online, and tickets were given on a first-come, first-serve basis. The event’s planning required much effort, and the organizers made tweaks based on their experience from previous years.

“We’re trying to go greener,” Nuñez explained, noting that the organizers this year decided to move away from having physical programs and, instead, embrace the digital world. They used
eventbrite.com, a website for organizing and promoting events, for this year’s talk. The speakers were not financially incentivized to present at Carnegie Mellon, Nuñez said. “We’ve flown different people in. We raise money for that, and these speakers are doing it for free.” There were multiple rehearsals before the event took place.

Senior trombone performance major Adam M. Janssen was the Master of Ceremonies. According to Janssen, “I’m a business minor in addition to music, and one of the required courses is marketing. In that class, a few seats away from me was Nadyli Nuñez, and after the first couple weeks, she came up to me, and she wrote to me in an email a couple days later.” Nuñez invited him to audition for the position of Master of Ceremonies.

“I was of course very much flattered, and I was aware of TED talks and the TEDxCMU conference,” Janssen said. “However, I hadn’t really done much of this kind of work. But I had a recital back in February of last year, in which I was my own Master of Ceremonies, so I had a little bit of experience that was enough for them to credit my ability, so I auditioned, and a couple days later they emailed me and said they’d like for me to be the Master of Ceremonies.”

“Like the parts of a machine, everyone has their own duty,” Janssen said. “And in true teamwork fashion, we are working for a higher purpose. I found our speakers this year to be very exciting, and it was a new challenge, something I hadn’t done before. I’ve spent my life as a performer, but usually with [an] instrument in hand. I’ve never really had the opportunity to have my voice as an instrument.”

“There are eight speakers, two performers and two videos,” Janssen said of the event. “[We have] Matthew Gray, who is a stage director who prides himself in collaborations with other disciplines. We have Richard Pell, who opened a Center for PostNatural History.... We have Nina Barbuto, who founded Assemble, which is a space for creativity through different projects. We have Dan Boyarski, who was a professor in the design department here, and he’ll be talking about kinetic typography.”

Meredith Grelli, who co-founded Wigle Whiskey with her family, also spoke at TEDxCMU. Grelli’s is the first whiskey distillery in Pittsburgh since the prohibition era. Lorrie Faith Cranor, director of the Carnegie Mellon CyLab Usable Privacy and Security Laboratory, gave a TED talk about Internet security. Founder of OpenCurriculum Varun Arora also spoke. OpenCurriculum is a free online database of curated teaching materials and curricula. Scott Andrew and Nina Sarnelle performed on behalf of the Institute of New Feeling — a research clinic experimenting in news ways of feeling physically and emotionally — to demonstrate some of the techniques they use there. Mallory Wang, a junior information systems major, demonstrated her Chinese yo-yo skills.

One of the speakers, Jane Werner, talked about sewing and its relation to her Makeshop program at the Children’s Museum of Pittsburgh, in which “children and families can design, create, and play freely using their own imaginations.” Werner has also developed Makeshop Plus, which is geared toward “older children who are still exploring their childhood passions.”

Werner said that the reason she is a children’s museum director is because she used to sew. The process of sewing, in which changes, rips, and improvisation are often employed, is similar to life, she explained. “Sewing taught me a whole bunch about materials, and [Makeshop] is teaching these kids also to see their world in a new way,” Werner said. “It gave me confidence [and] perseverance, and you can see how proud people are of their works. It’s important that we give kids and families this opportunity to work together and discover who they are.”

Dan Boyarski, professor and former head of the School of Design, talked about kinetic typography and how it facilitates communication. He compared the book culture of the past to digital culture and explained how the current digital culture has more to offer. While books are static, digital mediums are more dynamic. Digital culture, he argued, can be more effective in conveying a message than books.

The diversity of presentations appealed to students who attended. Baek Kim, a sophomore electrical and computer engineering and robotics double major, said, “I liked the presentation on kinetic typography and the first presentation, because I thought it was interesting how [Gray] connected Shakespeare to binary.”

“I just declared my robotics major, and I liked how he connected his speech to something I can relate to. I liked all of the presentations,” Kim said.