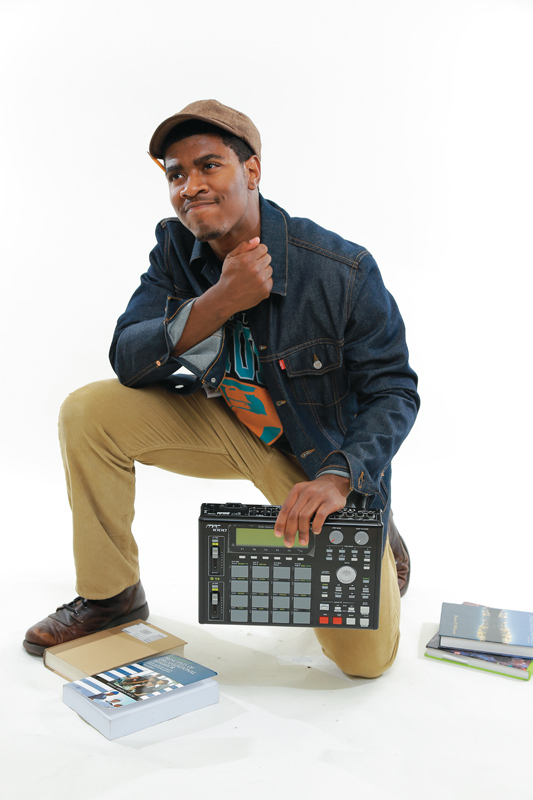 Kai Roberts has been writing verses since he was a child, and has channeled his passion into _Carnegie Café_, which is available for free at the University Bookstore. (credit: Courtesy of Kai Robertts)

“A lot of times when I do shows .... I intend to meet you where you’re at and bring you to new heights. Meet you where you’re low and connect with you there, and then bring you up by the end of the show. And that’s kind of my philosophy with music now, kind of really hitting at the struggles of life and the human experience, and making it more bearable .... making struggles laughable, almost,” Kai Roberts said with a confident air as he leaned back in his chair.

Roberts, a senior business administration major with a concentration in marketing, released his debut album, Carnegie Café last November. The album explores the various pressures exerted on college students, most notably the extreme stress that a lot of Carnegie Mellon students endure.

However, Roberts pointed out that there is a difference between stress and mental health, as stress is a very immediate feeling, “an activator of emotional distress,” whereas anxiety and depression are more deeply rooted in worrying about the future and dealing with the past. According to Roberts, “anxiety and worrying about the future by way of the past was the driver in Carnegie Café.”

“I was just dealing with anxiety issues; they started in fall 2012,” Roberts said, speaking about the inspirations that germinated the album. “I took [a semester] off so I could clear my head, so I could refocus myself and kind of vent. Carnegie Café was really that venting process .... After a while, it turned into a higher purpose. I really want to enlighten people on the ideas of mental health, and how to deal with stuff in college, and how to, essentially, face yourself.”

An album that helps people face themselves is a tall order, but Roberts has experience using music as a tool for dealing with the world and interacting with others. In high school, he was a member of Arts Greenhouse, a hip-hop education program that inspires local teens through music. In college, Roberts continued to work with the program as a mentor. However, Roberts’s love for hip-hop began long before high school.

“The first hip-hop album I remember listening to was Snoop Dog’s Doggy Style album. I was like three, but my dad would put it on, and we’d just dance,” Roberts said.

“It was just fun, and I feel like that launched my interest in music. A little bit older, my dad started DJing, pretty much old school parties, but some younger stuff. There was this monthly CD that used to come in the mail — I’m not even sure if they still have it — so he would order these just to stay up on the new music. And me and my brother, we just loved when this CD came. We would wait for this CD every month, and every time it would come, we’d plug it in and listen to the new music.”

In fact, it was one of these early CDs that prompted Roberts’ very first verse. “One CD came in — I don’t know if you remember Lil’ Romeo — I was jealous of Lil’ Romeo,” Roberts said. “It was like fourth grade.... All the girls were talking about him, going ‘aww, Lil’ Romeo!’ I was like ‘I can do that!’ So I got mad, and I went downstairs and wrote my first verse. And it wasn’t as good as Lil’ Romeo’s, but it was my first verse. That was the first actual hip-hop verse I remember writing .... I was trying to be better than Lil’ Romeo.”

In middle school, Roberts developed an interest in producing music, and then joined Art Greenhouse in high school, which helped him further develop those skills.

After forming a band called H&T (short for Heroes & Terrorists) with a group of friends, Roberts began to write his own verses. In his first year of college, he began performing with another band he formed with Carnegie Mellon students. “I really see myself as a mix of all three — writer, producer, performer .... I love every aspect of it,” Roberts said.

However, Carnegie Café was not just a debut album for Roberts, but a way to explore those interconnected passions. He said “I feel it’s not really an album, it’s an initiative, and I have to complement it with other ways .... other mediums for the message to get out there.”

One medium Roberts is exploring is called “_Carnegie Café_ Conversations,” in which Roberts goes to various freshmen dorms around campus to facilitate conversations and promote awareness of stress and mental health disorders. “If I had known what a mental health disorder looked like, it would have prevented a lot of struggle that I went through in healing myself,” Roberts said.

As to why Roberts feels that Carnegie Café should be more than just an album? “I hate the idea of making an album seem like a selfish endeavor,” Roberts said. “I really want to make this a community endeavor. This is for our community. This is Carnegie Mellon’s album. That’s why I named it Carnegie Café. It was really representative of a lot of our struggles. I just want to get people involved.”

Roberts has an upcoming show on March 19 starting at 8:15, at the University of Pittsburgh’s William Pitt Union, Northeast Palace. He was invited by Active Minds, a mental health awareness club on Pitt’s campus, and will lead a short discussion after the show. Carnegie Café is also available for free in the University Bookstore.