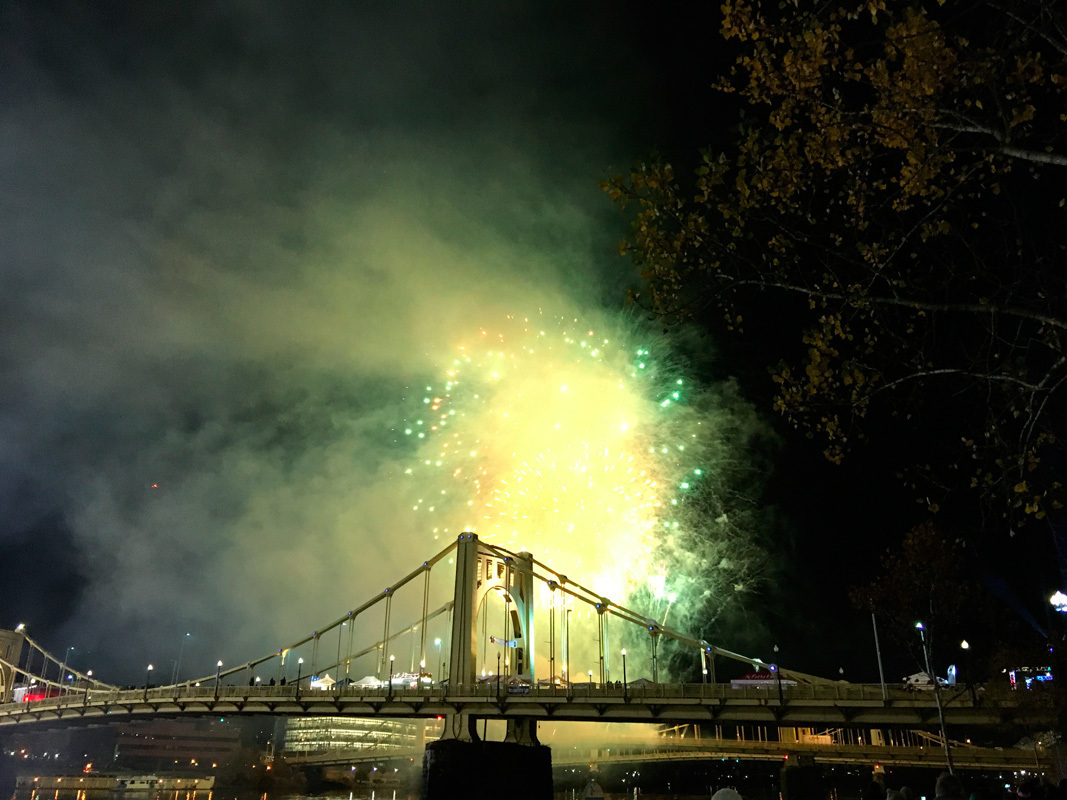 The evening culminated in a majestic and moving fireworks show that lit up the sky over the Allegheny River. (credit: Brian Trimboli/Editor-in-Chief) 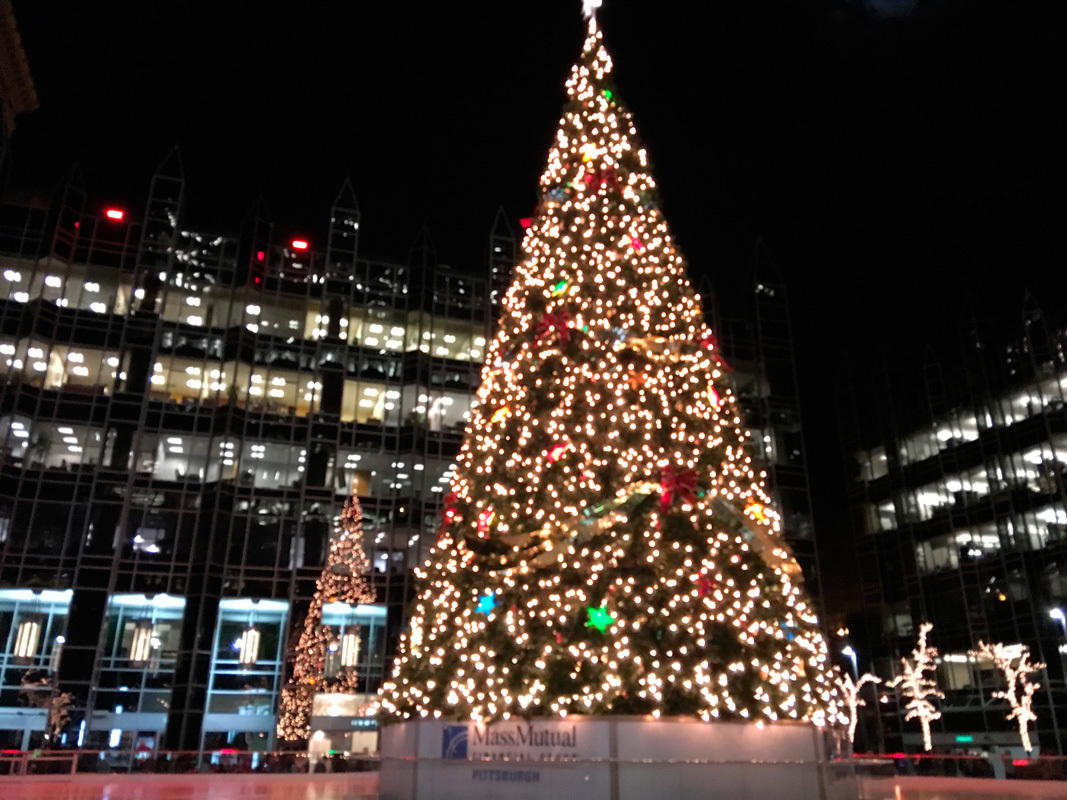 One of the focal points of the lights downtown is this enormous Christmas tree that makes the bus trip totally worth it, even if it is a little early for Christmas decorations. (credit: Brian Trimboli/Editor-in-Chief)

I don’t like the holiday season. I dread the six-hour drive home for Thanksgiving, I can’t stand snow, and I change the station when a Christmas song comes on the radio. Still, I go to Pittsburgh’s Light Up Night every year.

Last Friday, the city celebrated the beginning of the holiday season with lights, ice sculptures, food trucks, local music, and this year’s headliner, JoJo. I can’t name a single JoJo song off the top of my head, but I appreciate her B-list roles in family classics like RV and Aquamarine, and the nostalgic touch she brings to a night of holiday magic.

I took a bus downtown and arrived around 6 p.m., right as they lit the tree at One Oxford Centre. During Light Up Night, as you might gather from its name, the city lights all of the Christmas trees downtown. The last tree to be lit is the Highmark Unity Tree at 7 p.m., accompanied by rooftop fireworks.

I spent some time wandering through Market Square, which was transformed into a village of pop-up shops and holiday kitsch, and got dinner from one of the food trucks parked on Smithfield Street. There were trucks from Nakama, BRGR, Franktuary, and other like restaurants — all delicious choices — but I ultimately ended up with a burrito from a Mexican food truck, because it had the shortest line.

As I ate my burrito, I caught snatches of local Pittsburgh performers The Stickers, three brothers with Western Pennsylvania flair. I waited in line to see the “Winter Garden” at PPG place, where I harshly critiqued the gingerbread houses built by local schoolchildren and Girl Scout troops, and learned about Christmas traditions across the world.

After putzing around the Winter Garden and Market Square some more, it was time to get in place to see the woman, the myth, the legend: JoJo. JoJo played from a stage in the middle of the Roberto Clemente Bridge, against the dramatic backdrop of the PNC Park and Heinz Field. I didn’t arrive quite early enough, which meant that I saw and heard her from across the bridge, about 300 yards away. Although it’s impressive (and characteristic of Pittsburgh) that the stage is set up on the Clemente Bridge, it’s a bit of a logistical nightmare. The curve of the bridge, for example, made it difficult to see the stage unless you were packed in at the front.

JoJo took a little too long to come out after opener and Mount Lebanon native Daya, who sang her radio hit “Hideaway.” After the crowd shivered (literally, because it was freezing) with anticipation for a while, JoJo took the stage and opened with the 2004 classic “Baby It’s You.”

JoJo also sang the decade-old hits “Leave, Get Out” and “Too Little, Too Late,” which made me realize that maybe I did know a little bit of her music. JoJo looked good, still young at 24 — her 2004 hit singles are all the more impressive when you know that she was only 13 when they were recorded. She also performed her new song “When Love Hurts,” and finished out her brief set with a Christmas song, lending it the emotional weight and holiday cheer that only JoJo could. Her performance could have been a little longer, but I do think she gave a better performance than last year’s show from the now defunct pop-dance band Cobra Starship.

An hour after the performance, there were fireworks launched from the Andy Warhol Bridge. As the temperature dropped — it was now around 9:30 p.m., and below freezing — I found a perfect vantage point on the waterfront by the Point. I want to make one thing clear: I love fireworks. I love them. I don’t know why, but pyrotechnics never fail to put me in an emotionally vulnerable place, so I was particularly excited for this part of the evening.

Light Up Night always features a pretty good fireworks show, and this year’s did not disappoint. I ended the show teary-eyed, imbibing deeply in Pittsburgh’s holiday spirit in spite of myself. Maybe it was because it’s my senior year and my last Light Up Night in Pittsburgh, but this year’s festivities hit a good balance of Pittsburgh charm, holiday magic, and winning performances.