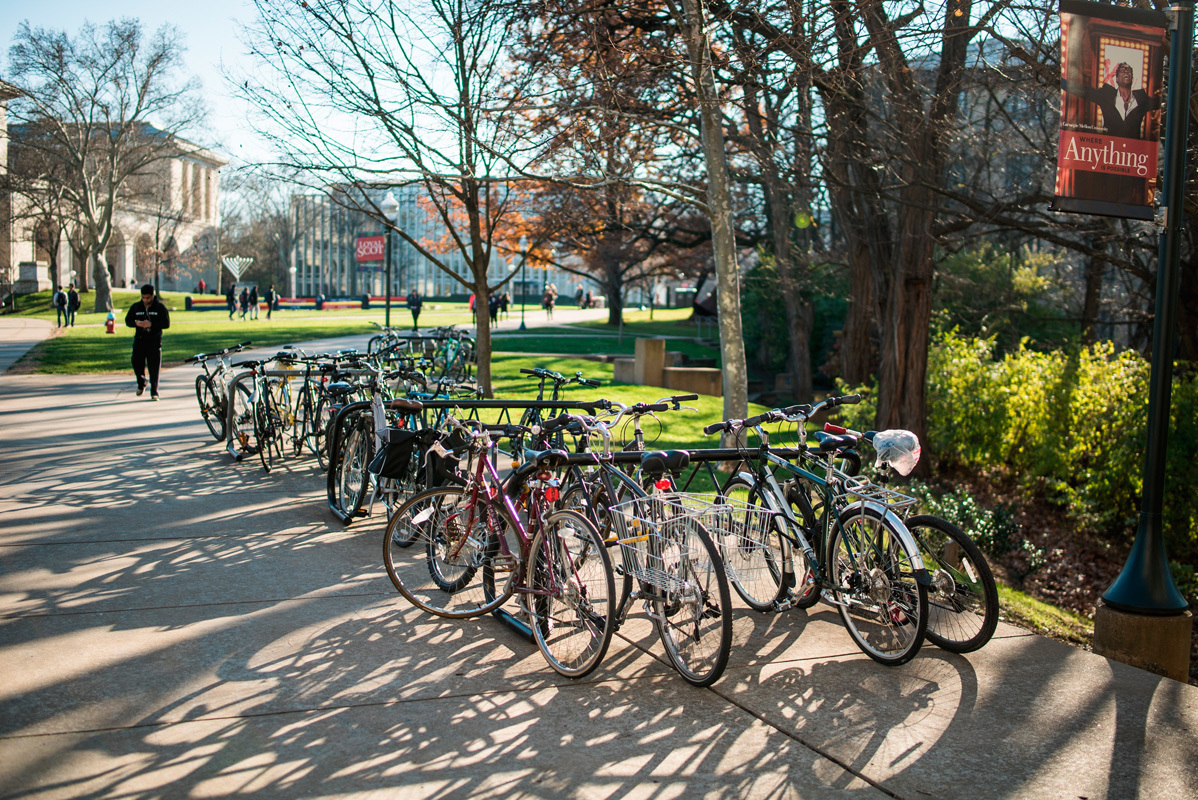 The removal of bike racks around campus has prompted many to question Carnegie Mellon’s dedication to biking culture on campus, while many improvments around the city indicate that it will soon be a better place to bike. (credit: Brandon Hong/)

As bicycling becomes more popular around the country and in Pittsburgh specifically — according to non-profit and bicyclist advocacy group Bike Pittsburgh, the rate of Pittsburghers commuting by bike increased by 408 percent in 2014 — both the local government and the university have taken steps to change how bikers make their way around the city.

In the fall of last year, for example, the city announced the installation of artist-designed bicycle racks in the Cultural District downtown after implementing two new miles of protected bike lanes earlier that year. The new lanes were created as part of the Green Lane Project 2.0, an initiative from national organization PeopleForBikes.

These reforms play into Pittsburgh Mayor Bill Peduto’s “Complete Streets” initiative, announced in April. The $32 million plan spans the next five years, and intends to make Pittsburgh’s streets safe for pedestrians and bicyclists alike with upgrades to traffic signals, bike lanes, and sidewalks. Pittsburgh City Planning Director Ray Gastil said in the first public meeting on the Complete Streets initiative last Tuesday that the city expects to install 10 new miles of bike lanes per year over the next five years.

Organizations outside of the government have also made efforts to make biking easier in Pittsburgh. Over the course of the last year, the Pittsburgh Bike Share has opened 50 bike sharing stations with 500 bikes powered by Healthy Ride, small non-profit based in the Strip District. Using Healthy Ride, cyclists can rent bikes and return them to any station across the city. Erin Potts, director of marketing and outreach for the Pittsburgh Bike Share, told the Pittsburgh Post-Gazette that the service has had over 200,000 riders since May 31.

Despite great strides, biking in Pittsburgh isn’t perfect. Bicyclists in Pennsylvania over the age of 12 are not required to wear a helmet, and last month an assistant director at the University of Pittsburgh’s Center for Russian and East European Studies was killed after being trapped between two vehicles while biking on Forbes Avenue in Oakland, less than a mile from Carnegie Mellon’s campus.

At Carnegie Mellon, crowded bike racks around campus are a testament to how many students, faculty, and staff bike to, on, and around campus, and some students are having difficulty reconciling Carnegie Mellon’s continued efforts at campus redesign with a bicyclist-friendly future.

A year ago The Tartan published a letter to the editor from Bruce Chan, a student in the Master of Urban Design program in the College of Fine Arts who graduated in August.
Chan took issue with the university’s renovation of Legacy Plaza, what he calls “a truly inviting space for social and active interactions to happen.” The Plaza, strung with lights between West Wing and the Jared L. Cohon Center, is home to the Tartan Express food truck and outdoor seating for students. One thing, however, is conspicuously missing — bicycle racks.

“The redesign does not provide any bike parking. In fact, the existing bike racks on the north entrance of Margaret Morrison Hall were relocated on Nov. 3 to the north side of West Wing and Resnik House,” Chan wrote to The Tartan. “This is all part of the university’s larger plan to keep bicycles on the perimeter of campus…. Cyclists will park their bikes at the closest entrance of their destination and lock up to whatever is most convenient: trees, the railing, benches, chairs, and maybe the food truck itself. This rogue parking will only add clutter to the new Legacy Plaza and diminish its quality.”

In a recent interview with The Tartan, Chan said that he is still working to make life better for cyclists in Pittsburgh. Certain neighborhoods, Chan says, are almost inaccessible from campus by bike. “Right now a lot of students are stuck living in Shadyside and Squirrel Hill because of the inaccessibility to campus,” Chan said. “If CMU was able to really embrace students biking more, grad students and undergrads could live further away from campus and have more access to affordable housing.”

In September, junior electrical and computer engineering major Don Zheng posted a picture of a bike chained to the Judith Resnik memorial on the Academic Mall to the Overheard at Carnegie Mellon Facebook group, which has over 13,000 members. Commenters on the post attributed the misplaced bicycle to a shortage of bike racks on campus — “CMU is adding bike racks, but not fast enough,” senior computer science major Stuart Guertin wrote.

John Pyun, a senior physics major, has had difficulty finding a place to park his bike among the construction on campus. “It got harder to find a place to lock up my bike after they started the construction, and I have to ride my bike around campus multiple times to find a place to park,” Pyun said. Pyun has also had his bike stolen, and as a result switched from a cable lock to a more secure U-lock, making it hard to chain his bike to objects that aren’t bike racks.

Chan said that although biking around campus can be difficult, the administration has been responsive in dealing with the concerns of bikers through organizations such as the Bicycling Advisory Committee (BAC), originally founded by Ph.D. candidate in rhetoric Mary Glavan as part of the Graduate Student Assembly.

Karen Brooks, co-chair of the BAC and self-identified “freelance bike geek,” has been working with Director of Parking & Transportation Services Michelle Porter to meet bikers’ needs on and around campus. Brooks also serves on the board of Bike Pittsburgh. “It’s a group of students, staff, faculty working to make bicycling better,” Brooks said of the BAC.
The BAC also offers classes, such as How to Ride in Traffic, to bikers on campus.

“We’re working to identify where the parking is and where it should be,” Brooks said of bike racks on campus. “Obviously there are a lot of bikes that get locked to railings and trees and all kinds of stuff, and it turns out that there are also some bike racks in the basement of garages and stuff where no one ever parks. I’ve been able to work with facilities to make some small changes here and there — move racks, put them places that are more convenient during construction — but we’re looking for a whole campus-wide sweep and distribution of the racks in the next couple of months.”

Brooks also acts as an ad hoc liaison between Bike Pittsburgh and Carnegie Mellon; Bike Pittsburgh has been working with Director Design of Campus Design and Facility Development Bob Reppe to keep bikers in mind as the university expands.

“Scott Bricker, the executive director [of Bike Pittsburgh], has been working with Bob Reppe and various other campus administrative staff to make sure that we’re advocating for the same things, and present a unified front as far as the city goes, and other entities like PennDOT and the Port Authority,” Brooks said.

Both Brooks and Chan acknowledge that there’s still work to be done for bikers and pedestrians on and off campus. “Fortunately, the campus itself is pretty safe, it’s pretty isolated,” Brooks said, “But as soon as you step off campus it gets pretty dangerous.”

“That bus stop, it’s right in the middle of the street,” Chan said. “There are talks of a safer way to cross Morewood and Forbes to access those points of transportation, and talk of a bike lane at Forbes to improve the safety of that intersection.”

Chan agrees, however, that biking in Pittsburgh is getting better. “One of the reasons I chose to go to CMU for urban design is because there’s a real culture of advocacy for transportation,” Chan said. “As part of my education I really wanted a city that had a robust and well-known advocacy group, and Bike Pittsburgh is known nationally as a great organization, and they have a great relationship with CMU.”