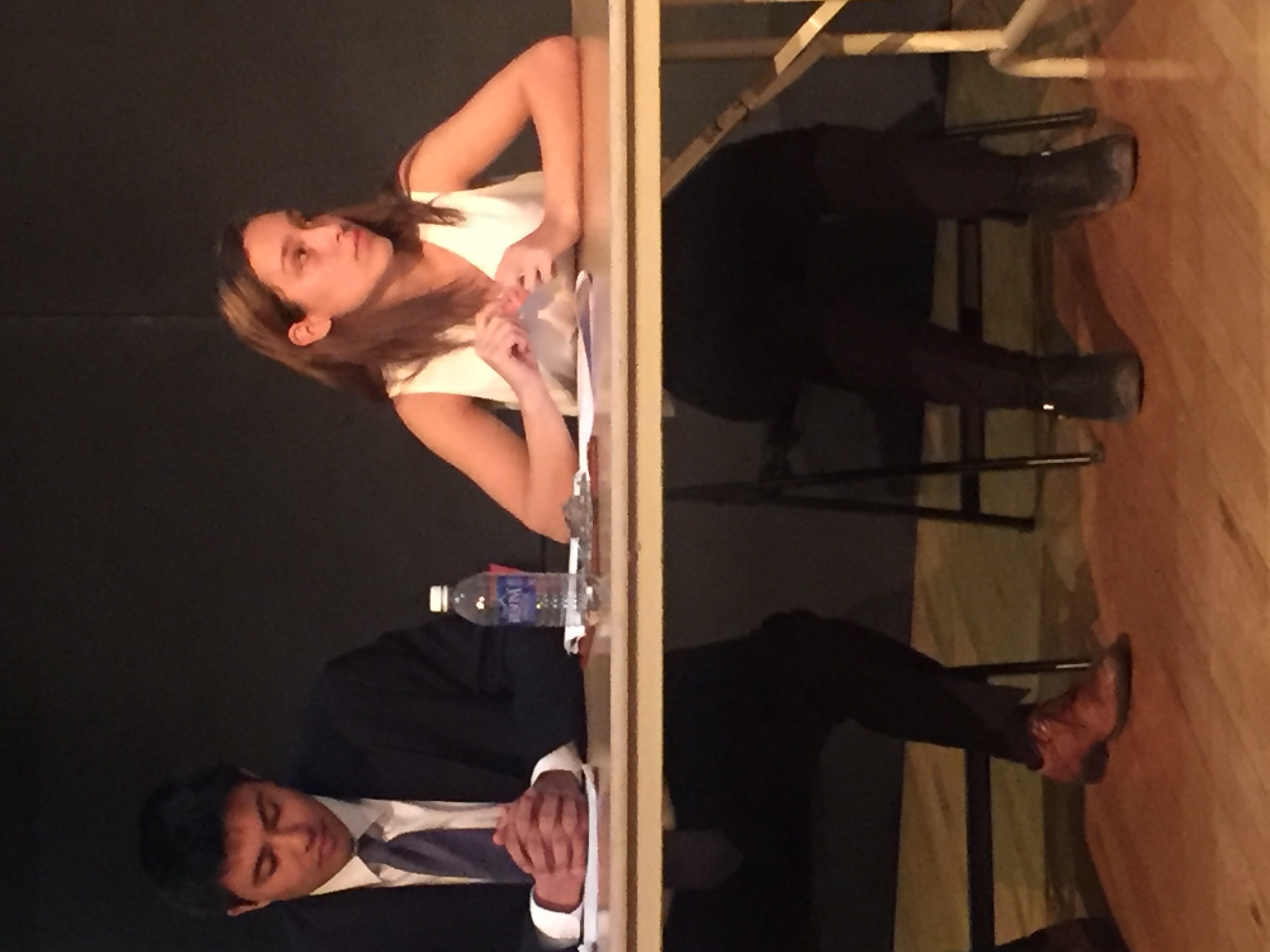 Mike and Olivia are looking to improve relations between the student body and the presidency. (credit: Jade Crockem/Operations Manager)

The debates, which are hosted annually by The Tartan in conjunction with Student Government, challenged candidates to justify their stated platforms while responding to moderator and audience questions about issues such as the university’s stress culture and sexual assault and relationship violence prevention (SARVP).

The pair emphasized the weight of their combined experience in Student Government throughout the debate, and highlighted work that they had each done across campus to improve student life. Their campaign, branded as “Vaas and Aaron 2016,” is built on university-wide fiscal transparency, a “model for social change,” and Student Government transparency.

When asked why fiscal transparency is important, Unnava said that when she was part of Undergraduate Student Senate as Business Affairs Committee Chair, she realized that she didn’t know what her tuition was being used for. “I think a big part of why we put this in our platform is having ownership over the changes that are made on our campus,” Unnava said.

As part of his current role, Hadick chairs the Committee on Student Organizations (CoSO) as well as the University Center Allocations Board (UCAB). Rabin is director of mature organizations on CoSO, as well as a sister of Kappa Alpha Theta.

“The biggest piece is the actual education,” Hadick said when asked about the inclusion of education and awareness on his platform. “There are a number of ways that education can happen — not all of them are in the classroom, and not all of them come from teachers ... It’s not like [there’s] one education method or type that will work best for [everyone].”

Rabin noted that she and Hadick are currently in talks to reform the university’s Interpretation and Argument class, which is required for all undergraduate students.

Junior professional writing and economics dual degree candidate Barbara Samaniego is running for SBP with sophomore economics major Raheela Ahsan as her running mate. Their platform focuses on making improvements to University Health Services, among other reforms focused on student health and safety.

If they are elected, Samaniego and Ahsan plan to host a series of narrowly focused town halls to garner student input. “In these themed town halls, attendance would be encouraged because each one would center around a social issue,” Samaniego said. “Then students would come to discuss that issue, and get a chance to actually offer their criticisms for the school. We will also have an online public forum for people who can’t come to these town halls.”

The last pair of running mates included junior statistics major Mike McCaffrey, who is running for SBP, and sophomore mathematical sciences major Olivia Cannizzaro, who is running for SBVP. McCaffrey and Cannizzaro emphasized their willingness to work with students going forward to make improvements to student life in the realms of dining, health, and “global engagement.”

“We’ll have an open-door policy, we’ll be constantly available, we’ll give out our cell phone numbers, emails, whatever it takes,” McCaffrey said about his and Cannizzaro’s plan to revamp Student Government office hours. “What we want to do is foster these kinds of relationships with people so we can create something together. We realize that we can’t do everything by ourselves — we can’t attend to all of these needs if we don’t know them.”

At the end of the two-hour debate, spectators were impressed by many of the candidates. Srishti Jain, junior statistics major and Communications Committee Chair of Student Senate, was glad that many of the candidates recognized and understood the value of the passion that defines the Carnegie Mellon community. “Everyone at Carnegie Mellon is passionate, and that’s something you hear all the time,” Jain, who is the public relations manager for Unnava and Gutierrez’s campaign, said. “And I don’t think in the past the Student Body President and Vice President have made conscious efforts to tap into organizations or individual students’ passions, but I think more candidates this year are trying to do that.”