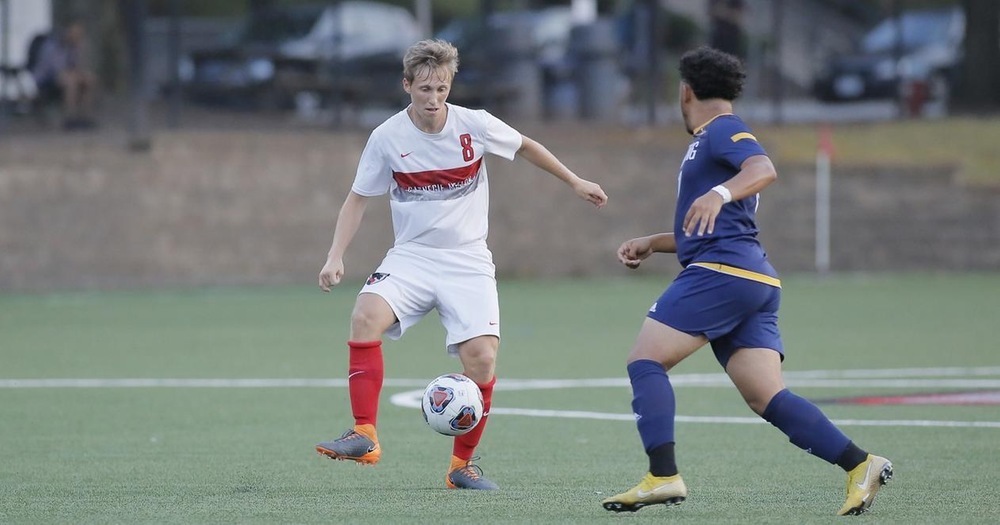 After a week of temperatures consistently climbing into the nineties, the Carnegie Mellon University men’s soccer team took to the field on a cool night to face off against the Lycoming College Warriors. Clouds were rolling in as a rousing rendition of the national anthem was performed by the Carnegie Mellon University public address system. The threat of rain was persistent throughout the night, but it held off for the entire game. The Tartans were also able to just hold off the Warriors in a 2-1 victory, putting their record at 2-0-1 for the season, after two double overtime games against Kenyon and Denison Colleges.

The first seconds after kickoff were indicative of the game to come, with Lycoming launching the ball over the top only to have it headed away by a Tartan defender. The Tartans controlled possession back up the field, where an awkward call by the referee led to a Tartan free kick that was punched away by the opposing keeper. As the game began to settle down around the fifteenth minute, the Tartans’ ability to outpossess the Warriors became evident, but the Warriors used their size and strength to stay in the game.

Coaches love to use the cliche, “Let the other team make mistakes,” but there is some truth to every cliche: teams need to play safe but capitalize on opponent’s weaknesses and errors. For the first half, each team played safe. The Tartans and Warriors played to their own strengths to outweigh each other, but each team’s strength in scrappy, physical soccer led to an increasingly chippy game. There were 17 fouls by each team, but only one yellow card was given. The referees were allowing the teams to play, but a handful of missed calls and wrong calls pushed the teams to get into the faces of their opponents and the refs. The first half ended in tepid fashion with the ball at midfield, but immediately after a handful of players were in the referee’s face.

The second half started with a bang. Lycoming was pushing hard against the Tartan’s possession in the back field, but were opened up to some quick switches up the field by the Tartans leading to a cross by senior forward Anthony Gulli landing on senior forward Zack Masciopinto’s forehead at the penalty mark for a snap finish into the far upper corner of the side netting. The Tartans were able to keep up the pressure on Lycoming just after the goal, forcing a corner moments later. A perfect ball was played into the box, but a head bounced it out to the opposite side for Gulli to play a cross towards the back post, where the Lycoming keeper fumbled the ball allowing it to drop and roll just across the line for a goal.

By the sixtieth minute, the score was 2-0 for the Tartans, and they started to slide into a more defensive game to help retain some control, until the last five minutes. Lycoming started pushing their attacking midfielders up to the line of the Tartan defense; the Tartans could only clear Lycoming attacks as far as their defenders, who just played the ball back over the top. Eventually the ball went out for a Lycoming corner that dropped to the ground between the Tartans’ senior keeper Alec Lam, and an attacking player who crashed into Lam. A foul was called, and the attack quelled for a minute.

Later, a Lycoming cross was played to the far side of the box and headed just over the Tartan defenders. Lam rushed out to prevent a goal, and the Lycoming attacker crashed into Lam, with both hitting the ground hard and the ball careening out to the opposite side of the box, where a Tartan defender tackled a Lycoming attacker from behind. A penalty was called, taken, and then finished by Lycoming to make the score 2-1. The players on the field rushed into the net, and a scuffle ensued. The referee had no control for the last three minutes of the game, but the Tartans were able to fight off a physically strong Lycoming Warriors team. In classic Tartan fashion, their heart was in the work, but their brains won them the game.

After a commanding win at La Roche College on Sunday night, the Tartans will next face Westminster College on Friday, Sept. 14 at 7:30 p.m.