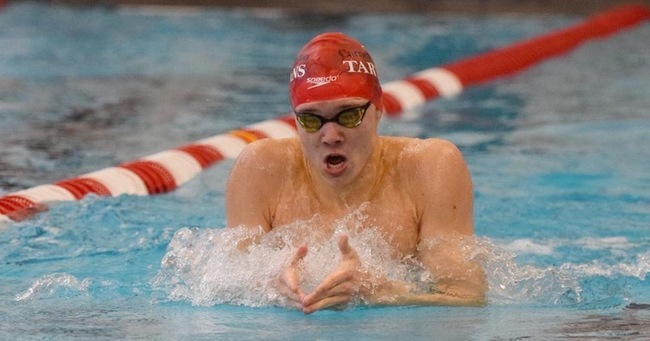 Colin Daniel bettered his seed time by over nine seconds in the 200-yard breaststroke to set one of several school records achieved at Kenyon College. (credit: Photo courtesy of Carnegie Mellon Athletics)

With the semester well underway, the Carnegie Mellon swimming teams went to the UAA Championships before traveling to Kenyon College to compete in the Kenyon Fast Chance Invitational, the track and field teams ran at Bucknell in a tune-up for the outdoor season, the basketball teams are on a homestand against Emory University and University of Rochester, and the tennis teams are on strong win streaks against highly-ranked NCAA teams.

The women’s tennis team, ranked seventh nationally, is on a five-game win streak. Last week, they beat Case Western Reserve University, ranked 29th, by a team score of 8-1. Before that, the women’s team swept 25th-ranked Denison University with a 9-0 scoreline. The first few matches of the semester were an 8-1 win against Slippery Rock University, an 8-1 win against Hope College, and a 7-0 win against Indiana University of Pennsylvania. Since the beginning of the school year, the women’s tennis team is 8-1, losing only one match at a neutral site. They are 6-0 at home. This week, they travel to Centre College in Danville, KY, to play in the ITA National Indoor Tennis Championship.

As for the women’s swimming team, they placed fifth at the UAA Championships. Unfortunately, no swimmer qualified outright for an NCAA tournament appearance from the competition. However, sophomore Kierstyn Cassidy, first-year Tiffany Tseng, first-year Bonnie Wang, first-year Mathea Myhrvold, junior Jessica Chau, senior Emma Nicklas-Morris, and senior Taylor Brown qualified for the B-cut of the tournament. Cassidy set a new school record at the Championships during the 1,650-yard freestyle event with a time of 17:20.69.

On the men’s side of the UAA Championships, the Carnegie Mellon team placed fourth overall. The men’s team has one provisional qualification for the NCAA Championships: the 400-yard freestyle relay of junior Justin Britton, first-year Yousef Hassen, first-year Matthew Nagler, and senior Sam Hawke coming in at a time of 3:00.93. Members of the team who qualified for the B-cut of the NCAA Championships include first-year John McNab, sophomores Richard Dauksher, Doug Johnson, Sean Ream and Colin Daniel, and junior Andrew Joyner. Additionally, Britton qualified individually for the 200-yard backstroke.

Both sides of the swim team found further success at the Kenyon Fast Chance Invitational. For the women, Brown dropped nearly eight seconds off her seed time, coming in at 17:15.04 to overcome the school record set by Cassidy a week prior and winning the race. Having stayed under 32 seconds for all of her 50-yard splits, Brown also set a new school record for the 1,000-yard freestyle with a split-based time of 10:24.28. The 400-yard freestyle relay consisting of first-year Clare Brown, Tseng, senior Mary Day, and Myhrvold set another school record, completing their time trial in 3:28.00, as Tseng and Myhrvold raced school record-breaking, split-based 100-yard freestyle times of 51.88 and 51.79, respectively. First-year Bonnie Wang put up a career-best 2:01.45 in the 200-yard backstroke — just a hundredth of a second shy of the current school record — a feat which placed her among the top-10 swimmers in the country for the event.

The men’s swim team performed exceptionally as well, with first-year Alex Chiu setting a school record in the 100-yard butterfly with a time of 49.29, and Britton surmounting it mere moments later, swimming a 48.25 to top the podium. Their performances allowed both athletes to provisionally qualify for the NCAA Championships in the event. Daniel then bested his seed time in the 200-yard breaststroke by over nine seconds, setting a new school record of 2:03.60, giving him a chance to be invited to the NCAA Championships. First-year Aleksander Tarczynski also provisionally qualified for the NCAA Championships by dropping four and a half seconds in the 400-yard IM time trial, finishing in 3:56.75. A third Carnegie Mellon men’s swimming record came from the 400-yard medley relay consisting of Britton, Daniel, Ream, and Hawke, who finished their time trial in 3:17.90.

After the start of a successful winter semester with a win against Case Western Reserve University in the Battle for the Obelisk, the women’s track and field team traveled to Roanoke. They came in second in the Noke Elite Meet, only behind meet-winning Washington and Lee University by four points. Last weekend they raced at Baldwin Wallace University, where the team placed in fifth out of five teams, and this past weekend, the team traveled to Bucknell for their tune-up.

The women’s basketball team started the spring semester with a rough patch, losing four in a row to Case Western, Emory, University of Chicago, and Washington University in St. Louis. After that rough patch, the team put together a few wins against Rochester and Brandeis University. Unfortunately, their fate turned for the worse after that. They’ve lost three more in a row for a season record of 10-13. Their conference record is 3-9. This weekend they faced off against Emory and Rochester, losing to both teams. Their final game of the season is next weekend against Case Western at 2:00 p.m. on Saturday at home in Skibo Gym.

On the men’s side of the ball, the basketball team saw an equally nonoptimal start to the spring semester with the loss of five of six games before Jan. 31. On Jan. 31, they beat New York University. After that, however, the men’s team dropped another five out of six games, including their home game against Emory this past Saturday. On Sunday, they lost against Rochester by a score of 82-81. The men’s team will be facing Case Western in Skibo Gym immediately following the women’s game against Case Western at home next weekend.

On the horizon for spring sports, track and field will move outdoors, softball will begin their season, and tennis will move back out to the courts outside of the Cohon Center for the end of their season. Swimming and diving now wait for official invitations to the 2020 NCAA Division III Swimming and Diving Championships, which will be announced on Thursday, Feb. 27.