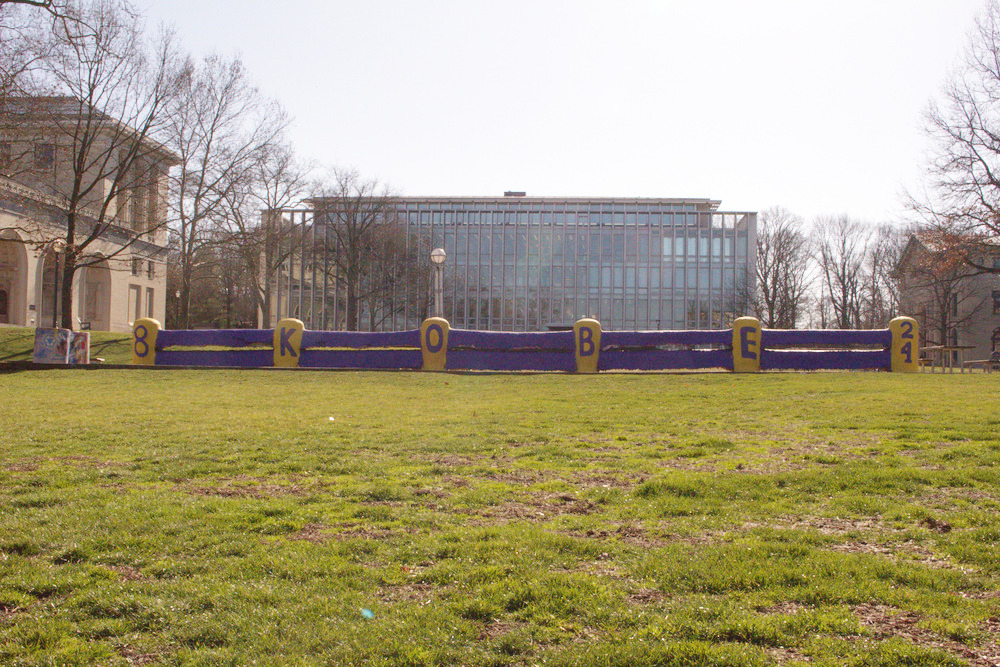 CMU students have painted the Fence in the Lakers’ colors, with Kobe Bryant’s jersey numbers on the ends. (credit: Cynthia Xu/Sports Editor)

Last week, retired NBA star Kobe Bryant died in a helicopter crash at the age of 41. Bryant’s daughter Gianna, age 13, also died in the crash. The tragedy also claimed the lives of seven others, including the pilot.

Over the past week, tributes to Bryant have come from across the NBA. The first night of NBA games after his passing saw teams taking a shot clock violation, 24 seconds, and their opponents taking an eight second backcourt violation. One night, the Lakers left shirts on each seat with Kobe’s numbers, 8 and 24, and left roses on seats where Kobe and Gianna Bryant previously sat.
In interviews, NBA players expressed their sorrow at Bryant’s passing. Numerous players posted their condolences to Twitter or Instagram. Many discussed the impact Bryant has had on the game from his time on the court, reaching numerous milestones, to his time after retirement, acting as a mentor to many of the young stars in the league.

Early in Bryant’s career, he faced an allegation of sexual assault. The case was settled out of court, and Bryant wrote a letter as part of the settlement deal. Since then, Bryant has not faced other allegations of sexual misconduct.

The day before Bryant’s death, LeBron James passed his career point total, and on Saturday, James finally played his first game since Bryant’s death. In a speech to the crowd before the game, James said, “Kobe’s a brother to me. From the time I was in high school, watching him from afar to getting in this league at 18, watching him up close. All the battles we had throughout my career. The one thing that we always shared was that determination to just always want to win and just want to be great.”

Kobe Bryant’s legacy as an NBA star is similar to that of many other famed players, like Michael Jordan, where their on-court reputation and importance to the sport outweigh any off-court issues they may have had. Bryant won one MVP award, and averaged 25 points a game, 5 rebounds a game, and 5 assists a game over the course of his career. He helped the Lakers win 5 NBA championships.