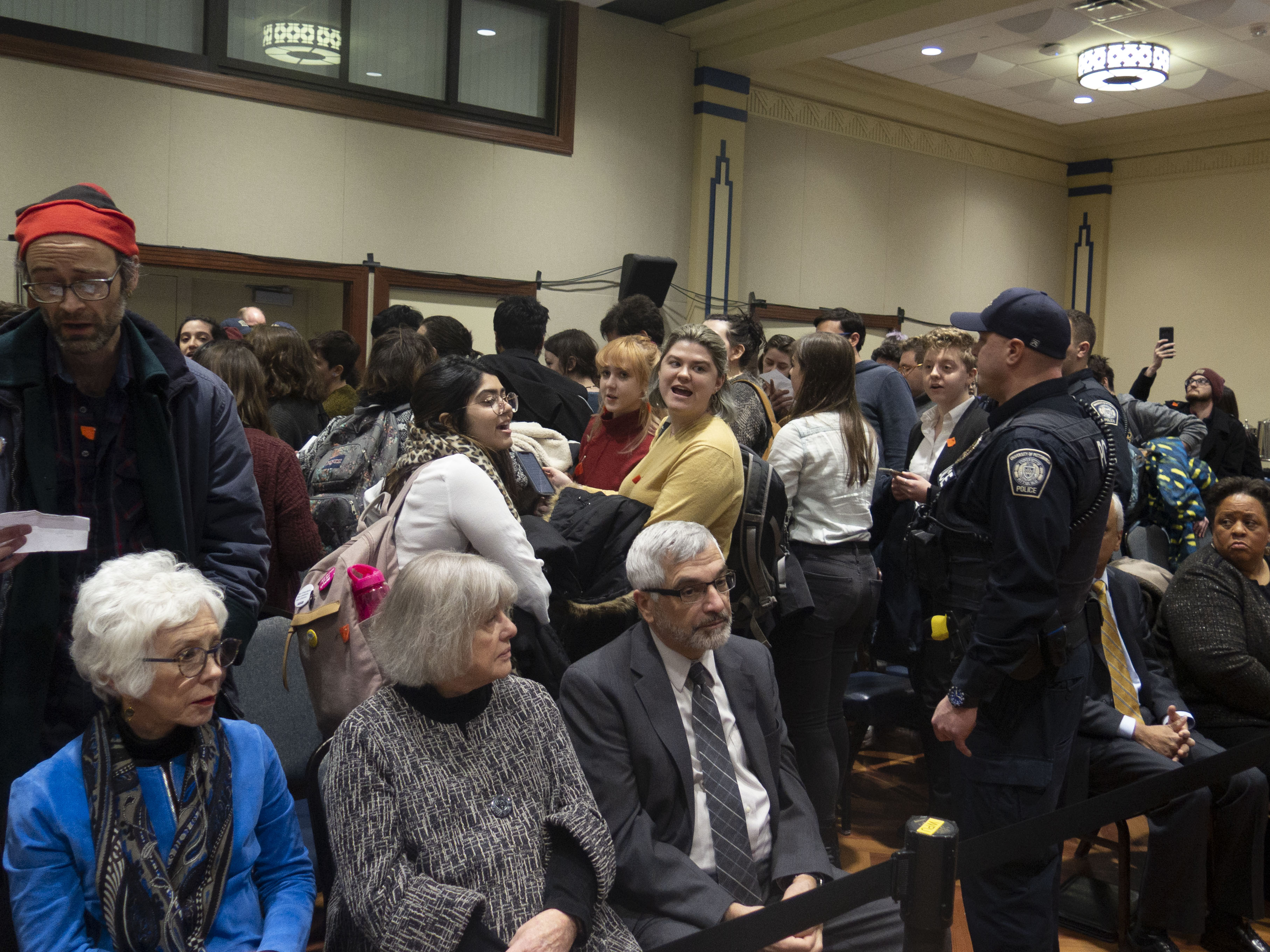 Friday begins with a hush. It’s sometime in the night, right around when the cold settles into your bones, and the ghosts that haunt the academic halls come out. These ghosts know our history, our past and present, and because of that, they know our existential battles. They’ve been on this planet long enough to see what is important, without the threat of death weighing over their heads. Ghosts are spectral interlocutors that exist to inform our future.

Some say the Cathedral of Learning is haunted by a ghost, the Early American Nationality Room, specifically. But there is a different existential battle taking place center stage in the Cathedral. There are no ghosts here, as this battle is to determine the future. A number of students, anywhere from 15 to 50 at a given time, are occupying the Cathedral to protest against the University of Pittsburgh’s investments in fossil fuels. But it’s more than that, as Annalise Abraham, an organizer for the Fossil Free Pitt Coalition and Pitt student, asked, “When push comes to shove, are you willing to take big steps to save the planet?”

On Friday, Fossil Free Pitt organized a group of students to attend the meeting of the Board of Trustees. At the meeting, the trustees would not answer the students’ demand for divestment. Instead, the trustees decided upon Chancellor Patrick Gallagher’s Socially Responsible Investing plan that would make the university carbon neutral by 2037, but that was not enough for Fossil Free Pitt. As Abhishek Vishwanathan, another organizer and student, said, “Carbon neutrality is not carbon zero. It is creative accounting.”

One of the ways in which the university could move closer to carbon neutrality is by investing in property that contains forests, investing in energy alternatives, or even just ensuring the lightbulbs on campus are changed to be more energy efficient. However, as Viswanathan said, the university is “basically buying their way out of the problem,” since they chose to follow a carbon neutral path. Instead of denying the expense of additional carbon exposure through the fossil fuel industry, protesters say, the university has chosen to simply diversify their portfolio with more green energy investments.

Fossil Free Pitt asks for more than carbon neutrality, however. They are demanding that the school divest any money in the endowment that is connected to fossil fuels. In 2016, it was revealed by the Paradise Papers that the University of Pittsburgh had invested in the hedge fund EnCap. This fund spends some of the university’s money on fossil fuel funding, so Fossil Free Pitt is demanding that the university divest their money from that fund and any other fossil fuel investments that the university may currently sustain. The university ultimately did not agree to the students’ request for divestment. The Board voted on a separate plan, but it does raise the question that Abraham asked: is the university willing to take the requisite steps to help the planet?

Currently, Pitt’s goal of carbon neutrality by 2037 will come on the 250th anniversary of the school’s founding. They will promote carbon neutrality by extending their sustainability plan, which will decrease the university’s energy use by 50 percent, purchase more energy from renewable sources, increase infrastructure efficiency, and build collaboration between school leadership and students. Additionally, future investments for the endowment will have to go through a screening process to determine if they are socially responsible.

The Board of Trustees meeting saw Fossil Free Pitt make their demands clear. The Socially Responsible Investing process, carbon neutrality, and ‘creative accounting’ are not enough to appease Fossil Free, so they disrupted the meeting. They sang “We Shall Not be Moved,” and they were, eventually, removed from the meeting.

But they simply returned to the Cathedral, where the other side of the occupied space saw two smiling students handing out cupcakes for Founder’s Day, the 233rd anniversary of Pitt’s founding. Fossil Free Pitt continues to hold out hope that the board will hear their demands, make the decision to divest, and ensure that there will be future ghosts to haunt the Cathedral — this time, perhaps, the ghosts of a fossil fuel industry.