An old man at the end of the street looks out his window every day at 6 p.m. 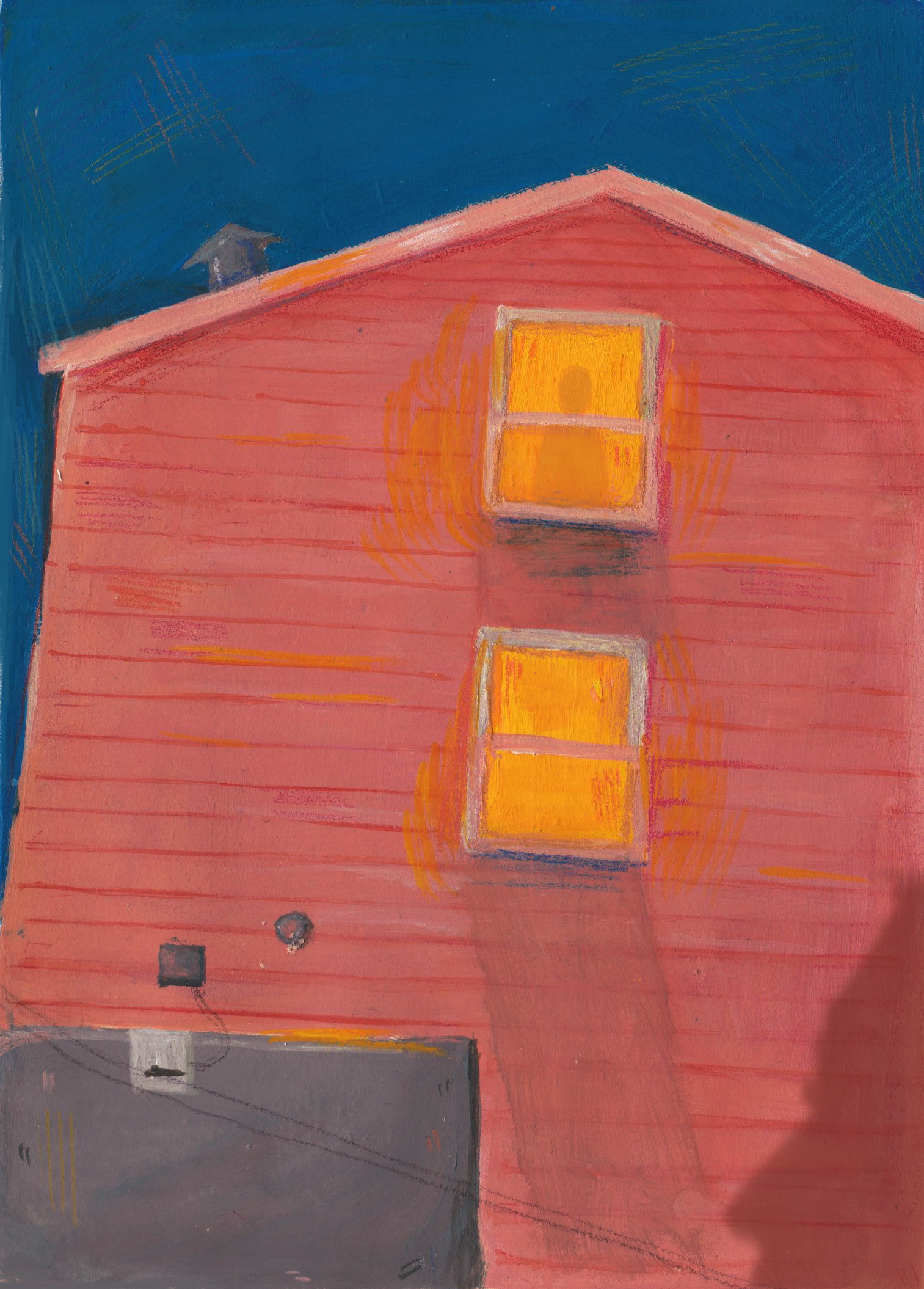 Without fail. Amongst the decrepit old houses and the flickering lights on the street, his house at the end stands out. It’s the only mansion on the whole street full of shanty, run-down, cheap housing. Whereas the other houses are all disgusting shades of brown and gray, his house is a pastel pink, popping out at the end like a cyst in the neighborhood. He’s been there in that cyst longer than I’ve been alive. And every day, he looks out the window at 6 p.m. He stays there for the rest of the night, watching us all until all the lights on the street turn off.

No one knows why. He doesn’t do anything. Some think he’s a predator, staring at the children in the street as they play. Some say he’s just the rich guy of the neighborhood with nothing to do, looking down on the rest of us living in squalor. Some respected him for that. Others didn’t. But a few feel sorry for him. Maybe he’s just lonely and doesn’t know how to talk to people, so he resorts to voyeurism.

I am one of those few.

He came to the window again yesterday evening while my friends and I were playing basketball. As I made the jump behind the three-point line, I looked at the window and we locked eyes. There was something about them that seemed pleading, yet cold. There was no light in them, yet his stare felt inviting, beckoning me to approach him.

Before my shot bounced off the backboard, I was already walking toward his pastel cyst, continuing to maintain eye contact with him.

I’m not listening. His figure stands out in the window, a silhouette shadow with piercing and defined eyes. What is drawing me to this place? I feel sorry for him, sure. But until yesterday, I had never considered going to the cyst.

The light casts my shadow against the outer wall of his house as I get closer. And closer. My friends have followed me, trying to get me to stop but unwilling to inch closer. The old man leaves the window for the first time. The light flicks off for the first time. I can feel my stomach closing in on my esophagus. But my mind is enamored with something unexplainable: a feeling of security and strange desire.

Before I know it, the old man tepidly opens the front door. He locks eyes with me again. They look like shimmering pools. Why are they moving like that? I turn around to find my friends, but they’ve disappeared.

He opens his mouth and inhales, producing a severe inhuman screech.

He beckons me inside. What am I doing? Why am I following him inside? Do I want to do this? It’s something in his eyes. Or maybe it’s the house. The cyst of the neighborhood is still the nicest house on the street. Is this what morbid curiosity does? I don’t know what I’m doing anymore. Yet, the feeling of security is still there.

The interior walls have eyes. They’re the same as the old man’s, hundreds of pairs of shimmering pools lined against the wall, their bulging pupils tracking my stride as I slowly inch down the hallway. The old man turns around and lets out another inhuman screech.

“I don’t know what you’re saying.”

His brittle body shakes, subtly convulsing. He marches forward. The hallway never seems to end. We’ve been walking for either ten minutes or ten hours now. My footsteps turn to lead the further we walk.

Finally, we reach a set of stairs draped in a luxurious red carpet leading to a golden door. The old man screeches again, pointing at the door.

He grabs me by my shoulders and turns me towards the stairs, gently positioning me in front of him. I can feel his heavy breathing on the back of my neck, sending synaptic shockwaves through my body. I have no choice. It’s time to go up those stairs. This can’t be happening.

I twist the doorknob ever so slightly. I look back at the old man, locking eyes with him again. Suddenly, I’m overwhelmed with the same emotion that drove me here. He knows me. He understands me. Yet he doesn’t know me and he doesn’t understand me. It’s a paradox of feelings that have led me to this door. The bulging pupils along the walls are all focused on me.

I enter the room, slowly closing the door behind me. It’s sparsely furnished. On one side, there’s just a bed. There’s an old man lying in it with an IV drip. On the other side of the wall, there’s an amorphous substance, pulsating slowly. Just staring at it would drive anyone mad, but I find it comforting. It speaks to me, but its words pass through me. There’s no comprehension in anything it says. I turn to the old man on the bed.

I turn around, and the brittle inhuman who led me here is staring blankly at the amorphous substance. I turn back to look at the old man in the bed. He looks even worse than his inhuman doppelgänger. His eyes don’t look like shimmering pools. Actually, they look like mine.

I gingerly approach him. He pulls me close.

He is unable to pronounce a lot of hard syllables properly.

The amorphous substance on the wall speaks to me again. I turn around, drawn to it. My body and mind have dissociated, acting independently of each other. My body wants to run. But my mind has glazed over. The substance pulsates more intensely. The brittle inhuman in front continues to stare blankly as the substance emits a light that passes through us and into the old man on the bed.

I hear the old man slowly moan in pain. His moans develop to groans. The groans develop into wails. The wails develop into shrieks, slowly becoming more and more inhuman like the man who led me here. I turn around.

His skin is peeling off, pulling him off the bed and into the air slowly. His shrieks of agony increase in intensity, his skeleton and his skin being held together by strings of muscle and deeper epidermal tissue. The light melts the skin, the particles of blood and flesh slowly making their way towards the amorphous substance. The brittle inhuman behind me also lets out a screech. I turn back to see that its skin and muscle have melted, leaving only its skeleton. The particles of flesh and blood from the old man start attaching themselves to the exposed skeleton, creating a new undefined figure. The figure slowly develops into a bare naked body. Its face forms last as the old man’s eyes, nose, lips, and teeth morph their way onto the new figure’s face. The light from the substance fades away, and I’m able to get a good look at this new figure in front of me.

The figure is me.

It stares at me as I stare at it. I try to run, but it grabs me. I lean away, but it caresses my face. It gives me the look I give to others as I reassure them. It’s eyes are warmer than mine, like shimmering pools. Its face glows in a way mine doesn’t. It leans in, caressing its cheek against me. It opens its mouth, forces my jaw down, and presses its lips against mine. Our teeth scrape against each other for a second before it clamps its teeth into my tongue, slowly pulling it apart as I struggle to break free from it.

I stare out the window, looking at the decrepit neighborhood, every day at 6 p.m. The days turn into weeks. The weeks turn into months. The months turn into years. The years turn into decades. Each day, I stare at the children, their parents, their loved ones, and their families, hoping one of them may look at me one day.

One day, someone finally made eye contact with me. There’s hope as I stare back. I’m watching him approach me, getting closer and closer. When his shadow is cast against the wall of the house, I get a good look at his face.