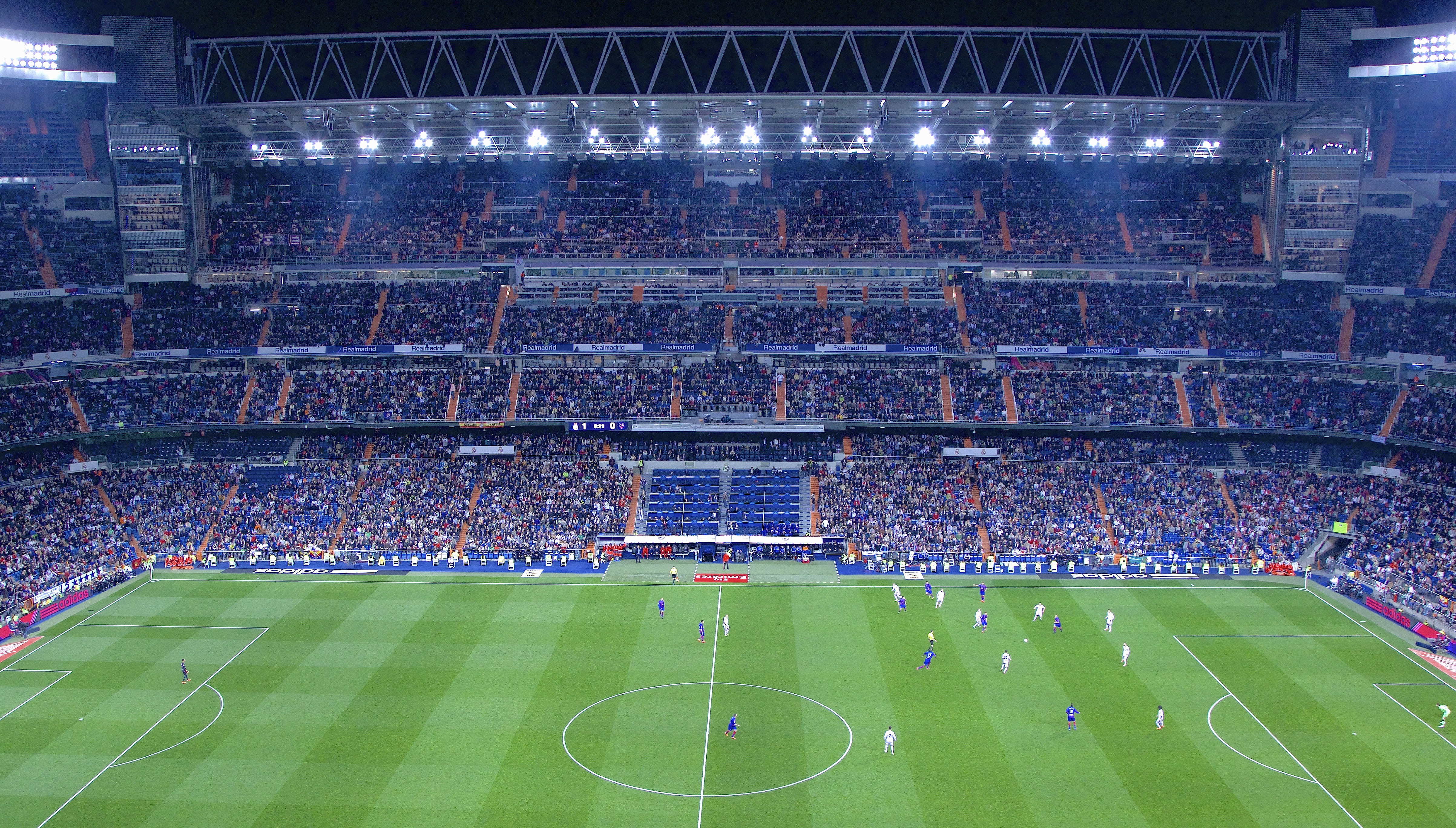 Being on home soil in the Estadio Santiago Bernabéu didn’t help Real Madrid as they lost to Sheriff 2-1. (credit: Photo courtesy of Terry Kearney via Flickr)

Shakhtar Donetsk vs. Inter Milan
In an ironic turn of events, both Shakhtar Donetsk and Inter Milan, despite recording 12 and 11 shots respectively, seemed unable to capitalize. Shakhtar had the advantage in terms of possession and Inter earned more corners, but out of their combined four shots on target, none were able to be converted. Shakhtar’s efforts in the 86th and 87th minutes looked very promising, but Andriy Pyatov denied both to keep the home side winless against Inter Milan in European competition.
Result: 0-0 draw Milan

Ajax vs. Beşiktaş
This match went as predicted. Though Beşiktaş gave it their best, they were outmatched by Ajax — the visitors only managed to scrape together four shots, none of them on target, against the hosts’ 22 shots (seven on target). Although the Beşiktaş defense played relatively well, they were unable to stop a fantastic run by Dusan Tadic down the left wing, resulting in a tactical finish by Steven Berghuis breaking the deadlock in the 17th minute. Ajax extended their lead in the 43rd minute when Serdar Saatci let his mark, Sébastien Haller, get in front of him inside the box, resulting in Haller converting a well-placed cross by Berghuis. Beşiktaş managed to prevent the Dutch from scoring in the second half, but were unable to make and take advantage of opportunities for themselves.
Result: Ajax won 2-0

Real Madrid vs. Sheriff
Sheriff, the dark horse in this year’s Champions League, managed to pull off the biggest upset of the week against Real Madrid in a stunning match. Despite Real having the home advantage on top of advantages in terms of resources, individual players, odds, and even statistics, they played carelessly and failed to take advantage of their 30 shots (11 of which were on target) against Sheriff’s four shots (three of which were on target). A long pass by Sebastien Thill to an unmarked Cristiano resulted in a neat cross into Jasur Yakhshiboev, whose clinical finish put the visitors in front in the 25th minute. The home side created chance upon chance, but no one was able to get past Georgios Athanasiadis until Karim Benzema’s penalty in the 65th minute. This became completely futile for Real, however, when Adama Traoré lobbed the ball to a completely unmarked Thill just outside the box, who calmly put it away in the top left corner to give the visitors their second ever win in the Champions League group stage.
Result: Sheriff won 2-1

AC Milan vs. Atlético Madrid
Rafael Leão opened the scoring for the home side with a well-placed shot in the 20th minute, and it seemed like things were going Milan’s way. However, a second yellow card for Franck Kessié in the 29th minute left Milan scrambling with 10 men on the field. Despite Atlético’s 22 shots, the Italian side was able to hold out until Antoine Griezmann finally put one past Mike Maignan in the 84th minute. A late stoppage-time penalty scored by Luis Suárez resulted in all three points going to the visitors.
Result: Atlético Madrid won 2-1

Borussia Dortmund vs. Sporting
Sporting put up a decent effort against Dortmund, but they were expectedly outmatched. The home side were without Erling Haaland, but young forward Donyell Malen stepped in to score in the 37th minute. Although the German side were far from their best, plagued by several injuries and missing key players, they managed to hold onto the lead to take home all three points.
Result: Dortmund won 1-0

PSG vs. Manchester City
In spite of Pep Guardiola’s Man City having over twice the number of shots and shots on target against their opponents, it was PSG who efficiently capitalized on their chances. Idrissa Gueye put a solid effort into the back of the net with just eight minutes on the clock, and despite City’s numerous attempts, no one could get past Gianluigi Donnarumma. Lionel Messi then broke out of his goal drought with a shot in the 74th minute to seal the win for the home side.
Result: PSG won 2-0

Porto vs. Liverpool
Liverpool put on an exceptional performance against Porto. Braces from Mohamed Salah and Roberto Firmino, plus a 45th minute goal by Sadio Mané, left the home side in shambles. Mehdi Taremi converted for Porto in the 74th minute, but it was too little, too late against a completely dominant Liverpool.
Result: Liverpool won 5-1

Leipzig vs. Club Brugge
Despite starting strong with the 5th minute goal by Christopher Nkunku, Leipzig was mediocre against a similarly mediocre Club Brugge. It was the Belgian side, however, that took control with Hans Vanaken scoring in the 22nd minute to equalize for the visitors and Mats Rifts putting one past Péter Gulácsi in the 41st minute to give Club Brugge the lead. Neither team was able to make progress in the second half, and the visitors left with all three points.
Result: Club Brugge won 2-1

Atalanta vs. Young Boys
Although they took the game with a narrow scoreline, Atalanta played well against Young Boys, putting seven of their 13 shots within the target area and limiting the visitors to only three total shots (one of which was on target). Still, Young Boys did well to keep the Italian side at bay until Matteo Pessina ushered a shot past David von Ballmoos in the 68th minute to give the home side the win.
Result: Atalanta won 1-0

Zenit St. Petersburg vs Malmö
Zenit St. Petersburg had statistically one of the best performances on Matchday 2. Managing a total of 23 shots, nine of which were on target. Of those nine on-target shots, Zenit converted nearly half of them, putting on an admirable performance against a less-than-pristine Malmö. Goals by Claudinho and Daler Kuzyaev in he ninth and 49th minutes made it clear that the home side were going all-in, and Anel Ahmedhodžić’s sending off in the 53rd minute further crippled the visitors. Aleksei Sutormin and Wendel then put an additional two goals past their Swedish opponents to give Zenit the win.
Result: Zenit won 4-0

Wolfsburg vs. Sevilla
Ironically enough, after both of these teams drew against their Matchday 1 opponents, they proceeded to draw in this match against each other on Matchday 2. Neither side played phenomenally, and the game was rather slow, sans the last 10 minutes. Wolfsburg took an early second-half lead with Renato Steffen’s effort in the 48th minute, but a series of Sevilla efforts near the end of the match culminated in a red card for Josuha Guilavogui’s challenge and a coolly converted penalty by Ivan Rakitić to put the visitors level.
Result: 1-1 draw

Bayern Munich vs. Dynamo Kyiv
Bayern Munich were stellar against an outmatched Dynamo Kyiv, solidifying their position at the top of the Group E table. The German side started out strong, finished clean, and Kyiv was unable to keep up. An early Lewandowski penalty gave the German side the lead in the 12th minute, which was soon doubled with another precise effort by Lewandowski in the 27th minute. Second-half goals from Serge Gnabry, Leroy Sané, and Eric Maxim Choupo-Moting left the visitors reeling and a dominant Bayern in firm grasp of all three points.
Result: Bayern Munich won 5-0

Salzburg vs. Lille
Both teams played similarly in a relatively less eventful Matchday 2 game. Karim Adeyemi converted two penalties for the home side in the 35th and 53rd minutes, and a 62nd minute goal by Burak Yilmaz was not enough for the visitors to overcome the deficit.
Result: Salzburg won 2-1

Juventus vs. Chelsea
Though Chelsea had the advantage in terms of total shots (16 against Juventus’ six), both teams were limited to just one shot on target, respectively, and it was the Italian side that converted it, with Federico Chiesa scoring the match-deciding goal just after the start of the second half. This was a less-than-ideal night for the visitors, who had the statistical advantage, dominating in terms of possession and recording a 90 percent pass accuracy. However, goalscoring efficiency is what wins matches, and it was Juventus that stepped it up in this respect.
Result: Juventus won 1-0

Benfica vs. Barcelona
While I had predicted that Barcelona would lose this match given their dismal record this season, their performance on Matchday 2 was even more disappointing than expected. Pedri gave the ball away in midfield shortly after the starting whistle to Julian Weigl, who passed it down the left wing to Darwin Núñez. Núñez then made a fantastic run into the box and put the ball into the bottom left of Barcelona’s net to make it 1-0 to Benfica with only three minutes on the clock. In fact, Benfica could have doubled their lead within the first five minutes if not for Ter Stegen. To Barcelona’s credit, there was a clear attempt to fight back, but the forwards seemed unable to get shots off into the target area, and the energy dissipated. Benfica took full control of the match in the second half, with Rafa Silva doubling the home side’s lead in the 69th minute and Núñez completing his brace with a 79th minute penalty. In a truly humiliating night, Barcelona recorded their second 3-0 loss in a row in this year’s Champions League (having lost 3-0 to Bayern on Matchday 1) and fell rock bottom in the Group E table, beneath third-placed Dynamo Kyiv.
Result: Benfica won 3-0

Manchester United vs. Villareal
To Manchester United’s credit, they managed to overcome their slump enough to take home all three points against Villareal. However, to say that this match was firmly in hand would be a big stretch. Both teams looked relatively equal in strength, and the first half was goalless. David de Gea played well in-goal and it wasn’t until Paco Alcácer’s effort in the 53rd minute that Villareal could take the lead. However, Alex Telles’s 60th minute volley put the hosts back on level ground, and Cristiano Ronaldo’s penalty in the fifth minute of stoppage time clawed back the game for United.
Result: Man United won 2-1