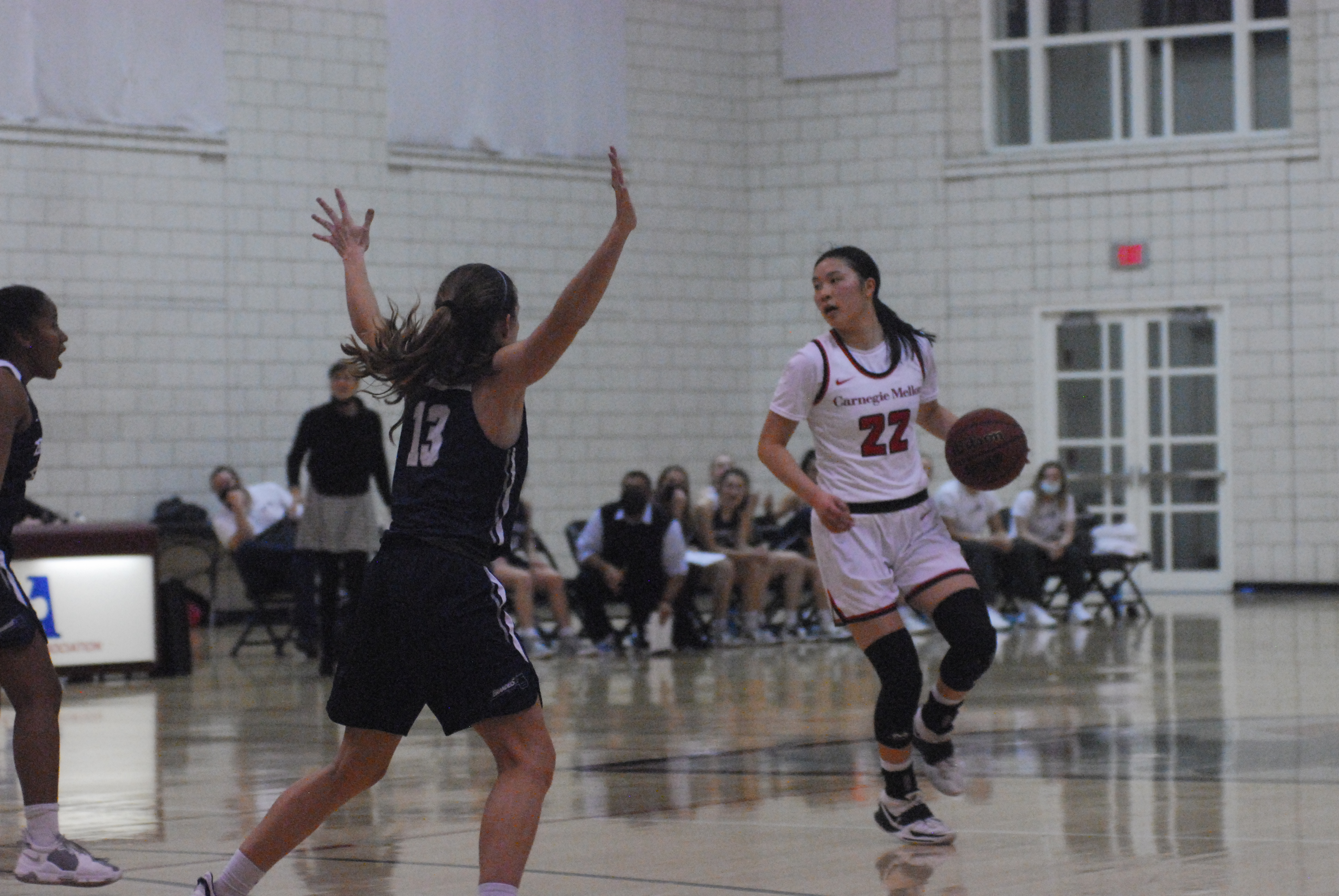 The Tartans fought to take the lead against the Brandeis Judges and held on well to win the game 66-51. (credit: Cole Skuse/) 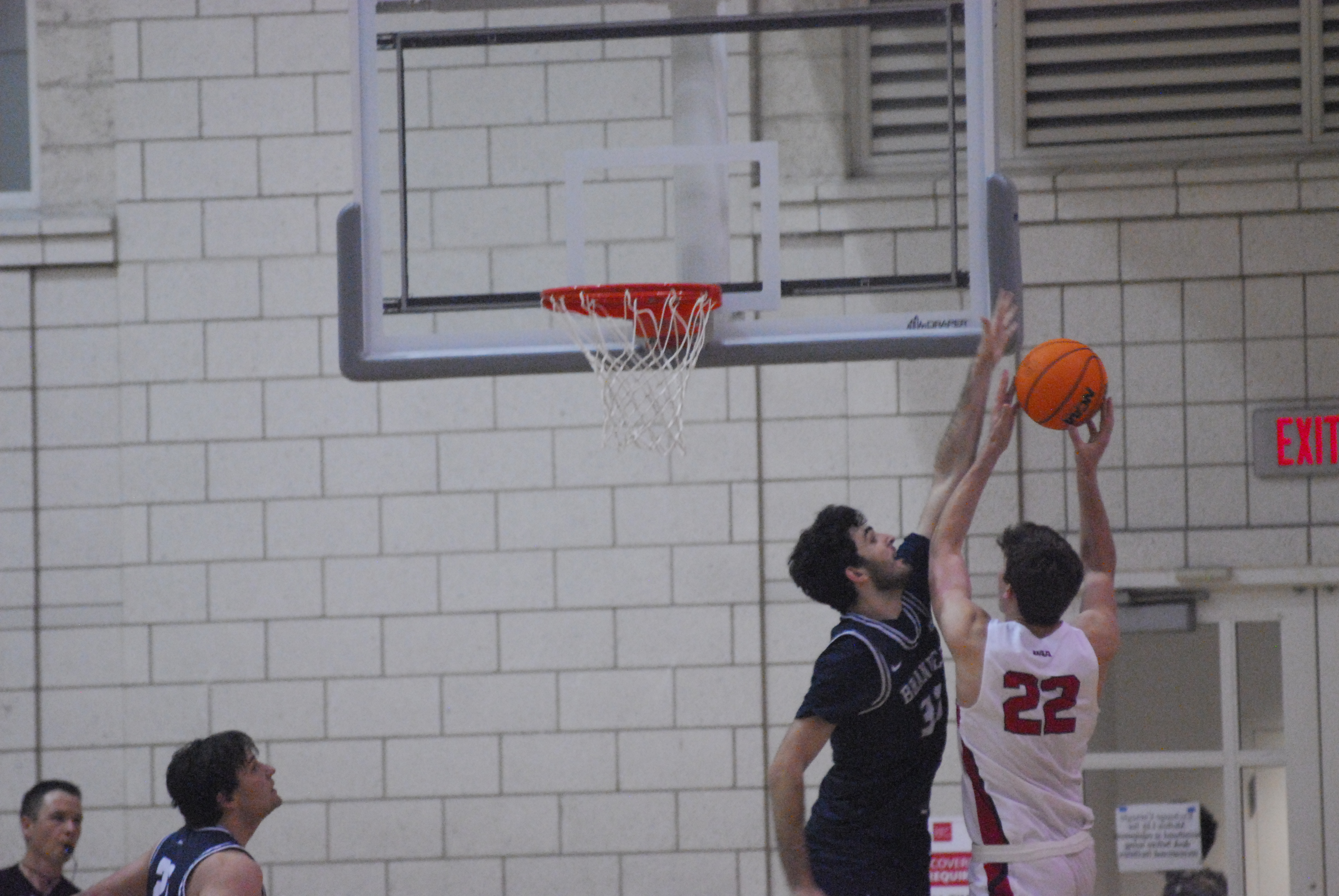 The Tartan men’s team rallied back to retake the lead in the second half and win against the Brandeis Judges 78-72. (credit: Cole Skuse/)

On Feb. 11, both the men’s and women’s basketball teams arrived back home after being on the road the previous week. The teams took on the Brandeis Judges in Wiegand Gymnasium in the University Center. This game marked the first game of the season that spectators were allowed into the game, including both the Kiltie Band and the Carnegie Mellon Cheer squad.

After two losses on the road, the men’s team was looking to bounce back. This game was filled with many back-and-forths between the Tartans and the Judges. In the first half alone, the lead changed three times with the Tartans eventually taking the lead thanks to sophomore Jack Stone. This lead lasted until the half, where the Tartans left 32-28.

However, the story was different following the half. The Judges quickly took back the lead after scoring eight points to the Tartans’ two in the opening of the half. It wasn’t long, however, until the Tartans regained the lead when junior Josh Berry finished with a layup, giving the Tartans a one-point lead, 44-43. This started a massive scoring streak for the Tartans; they would go on to score 14 points to the Judges’ two with almost ten minutes remaining in the second half, making the game 58-45 for the home team.

This didn’t discourage the Judges, though. In an attempt to take back the lead, Brandeis brought the game back within range, making it 75-70 with just over 30 seconds left in the game. Though close, the Judges weren’t able to make a complete comeback, giving the Tartans their 11th win of the season and their fourth in University Athletic Association (UAA) play.

Some highlights from the game include Stone scoring a total of 29 points, going four-for-five on three-point attempts. Junior Kevin Sax went six-for-six on field goal attempts and four-for-five on free throws for a total of 16 points. Sophomore R.J. Holmes also had a good showing, scoring 15 points on six field goals and recording three completed free throws.

The women’s basketball team was similarly looking to break their losing streak, having lost their last five games. After a brief delay in the game’s start due to a fire alarm going off in the University Center, the Tartans started off their game against Brandeis with a small lead over the Judges in the first quarter of play, putting up a score of 14-12. The pace of the game then proceeded to change drastically in the second quarter. With four three-pointers from freshman Isha Nambisan, the Tartans quickly racked up points, putting them up 35-18 at the end of the first half of the game.

The Tartans continued to keep up their pace in the third quarter with Nambisan scoring an additional three-pointer and sophomore Anika Prasad scoring three. Their efforts helped Carnegie Mellon score 21 more points compared to Brandeis’ 16.

Barrelling into the final quarter of the game, the Tartans slowed down their pace a bit, only scoring 10 points in the last 10 minutes. Notably, Nambisan scored her seventh three-pointer of the game, tying the individual game record and helping the team set a new record for three-pointers in a game, with a total of 13. In a last-ditch effort, Brandeis scored 11 points in the last run of the game, but that was not nearly enough to close the gap between the Tartans and the Judges. As the clock ran out, the scoreboard showed 66-51 in favor of the Tartans, moving them to 10-9 overall and a conference record of 4-6.

With her seven three-pointers, Nambisan finished with 29 points on the game, a season-high for the Tartans. Other notable players include first-years Anisha Chintala and Catherine Or, as well as Prasad, all scoring a total of nine points.