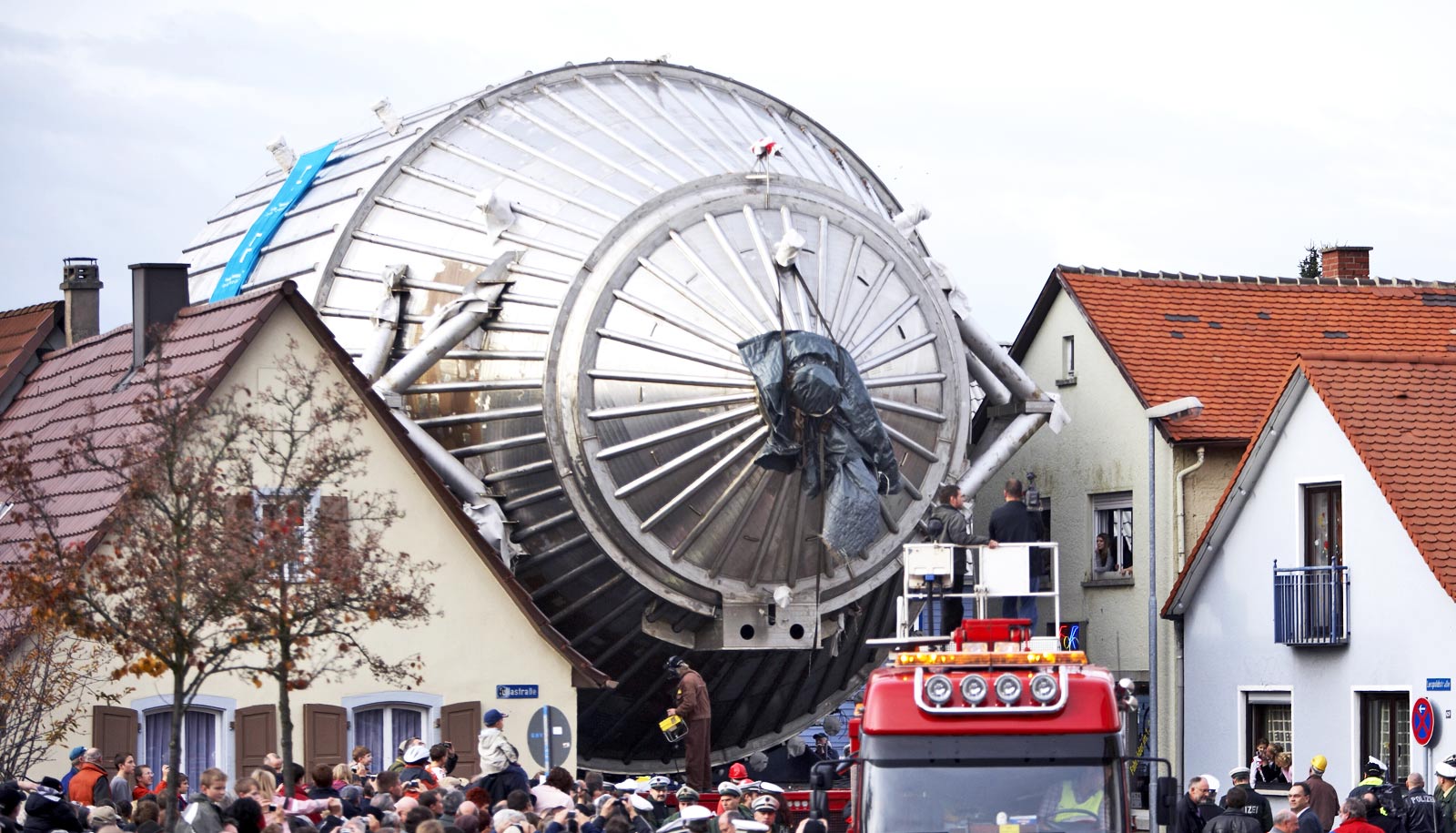 One of presenters at the Physics Slam, graduate student Byron Daniels from the Parno Lab, discussed the KATRIN project. The project investigates the mass of the neutrino, an elementary particle sometimes referred to as a “ghost particle.” The KATRIN experiment released a report recently that the upper mass of neutrinos is 0.8 electron volts. The above image depicts a spectrometer used in the KATRIN project. (credit: Courtesy of Karlsruhe Institute of Technology)

For the first time ever, on Feb. 17, the physics department at Carnegie Mellon held the Physics Slam, a gathering of affiliated undergraduate, faculty, and graduate students. The event, hosted by Dr. Gillian Ryan (Director of Undergraduate Affairs and an Associate Teaching Professor in the Department of Physics), was a chance for various speakers — professors and Ph.D. candidates — to give five-minute presentations about topics they were highly interested in or topics currently researching. For the audience, it was a chance for them to learn more about the happenings in the department.

Dr. Fangwei Sei, an assistant professor who will officially be joining Carnegie Mellon in June 2022, opened the evening with an overview of his work in discovering biological laws to quantitatively understand living systems. One of his most notable projects is the parametrization of a cell. Using tools from physics, engineering, and biology, Sei and his team simultaneously measure the cell's age, membrane size, and overall health. He and his lab plan to join the Biophysics Initiative in the Department of Physics.

The next speaker was Dr. Ben Hunt, a professor of Materials Science & Engineering, who gave a talk about what he considered the “coolest aspect of quantum mechanics”: macroscopic quantum mechanics — specifically, superconductivity. This feature can be achieved by cooling metal to a temperature at which it has almost zero electrical resistance. (Also, did you know that Dr. Hunt’s lab includes a fridge that can be as cold as 0.010 Kelvin? And that his main lab contains a superconducting magnet with a strength of 14 Tesla?) He then introduced the Quantum Hall Effect — another example of macroscopic quantum mechanics — which is the thresholding of resistance within an applied magnetic field inside a two-dimensional electron system.

Then, Professor Rachel Mandelbaum introduced the audience to weak gravitational lensing, a measurement using data gained from large sky surveys. Weak gravitational lensing can be used to measure masses, specifically of dark matter in the universe. Her lab uses data from the Sloan Digital Sky Survey (SDSS) and the Hyper-SuprimeCam (HSC), which capture detailed images of the galaxy. Professor Mandelbaum’s research asks questions like, “How is dark matter distributed in the universe?” and “What are the main components of the universe?”

Graduate student Byron Daniels from the Parno Lab spoke of neutrinos, which are particles so small that if a neutrino were a marble, then an electron would be the size of a grand piano. For a long time, neutrinos were known as ghost particles because of their lack of charge and near-absent mass, as well as their lack of interaction with most other forms of matter. As such, neutrinos are some of the most common particles in the universe. Daniels also provided an overview of the KATRIN project, which seeks to find the mass of a neutrino by looking at the end of a tritium beta decay reaction, as well as the COHERENT project, which measures the oscillations of neutrinos off of atomic nuclei.

Professor Tina Kahniashvili centered her talk around gravitational waves in the early universe, and how many of the sources of these gravitational waves are astrophysical. She gave an overview of how LIGO and GAIA (both large-scale observatories) have made immense progress in the detection of gravitational waves and other perturbations in space. In addition, Professor Kahniashvili spent some time discussing her interest in magnetohydrodynamic (MHD) turbulence research, which is applicable to many areas of astrophysics such as the intercluster medium and cosmic rays.

The next speaker, graduate student Matt Ho, presented work on the applications of machine learning in cosmology research. He used the Hercules cluster (also known as ABELL 2151), which contains many galaxies within the constellation Hercules, as an example of the many merging galaxies in the universe and how studying astronomy is difficult with the untrained human eye. Ho and his team are working on finding better methods of detection and analysis using principles from data science, statistics, machine learning, and artificial intelligence. One of the most notable projects in their lab involves cosmological simulations (such as two merging star clusters with a super massive black hole in the center). These can be used as teaching material for machine learning and robots.

Dr. Saheli Mitra, from the MSIL lab, spoke about her work with biological membranes and antimicrobial peptides, which can be found within the immune system of most organisms. In collaboration with the University of Pittsburgh, Mitra and her team design antimicrobial peptides using different combinations of amino acids and analyze their interactions with bacterial cell membranes (which are modeled in the lab). The information gained from these experiments is used to develop antimicrobial peptides as therapeutic agents for diseases.

Professor Scott Dodelson, the Head of the Physics Department, centered his talk around technological solutions that try to answer the question that has been asked for millennia: “How did we get here?" One of the answers includes a self-organizing map that groups galaxies into a single cell and finds the mean redshift value. A Fourier transformation can be taken of the map and squared in order to quantify the its smoothness with a power spectrum. Sky surveys can also be used to test, with high statistical precision, a canonical model that includes the existence of dark matter and dark energy.

Professor Carl Rodriguez, an assistant professor in cosmology and astrophysics, introduced the audience to binary neutron star mergers (in less than five minutes). A binary neutron star merger is the collision of two neutron stars in space, and is accompanied by the emission of gravitational waves and electromagnetic signals. To measure the interference with a gravity wave, the principle of LIGO is based upon a large version of a basic ether experiment. A laser beam is split in half, allowing the distances between the halves to change, and this creates interference that gravitational waves can be measured from. Thus LIGO is able to see perturbations in space, mainly those caused by dense objects moving at a fast speed. LIGO has seen many black holes as well as neutron star mergers.

Using the data from measuring the gravitational waves as well as the electromagnetic signals, the researchers working on LIGO were able to identify specific regions in space associated with the first double-neutron star merger.

And last but certainly not least, Professor Markus Deserno, whose interest is in theoretical and computational biophysics, ended the evening with a presentation on membrane asymmetry. Biophysics is the application of principles from physics and chemistry and the methods of mathematical and computational modeling to understand how living systems work.

One of the areas of Professor Deserno’s research is the role of asymmetry in membranes. Within the bilayer structure of the lipid membrane, the inner layer is noticeably different from the outer layer. This is an area worth exploring because “it’s rather involved to make such asymmetric membranes and then keep them asymmetric.” In other words, nature cares about maintaining this structure, though the reason is currently unknown. Membrane asymmetry is prevalent in many species of fungi, insects, worms, reptiles, and many other eukaryotic species.

Some of the current findings in this area involve the heightened rigidity found in asymmetric membranes, with respect to their symmetric counterparts, and how cholesterol molecules are shoved across the membrane due to the asymmetry present.

(Author’s note: All in all, this was a memorable event and hopefully one that will be repeated every year. Even if you aren’t a physics major or minor, it’s still a great chance to learn about what’s happening in the department and get to know people on campus.)