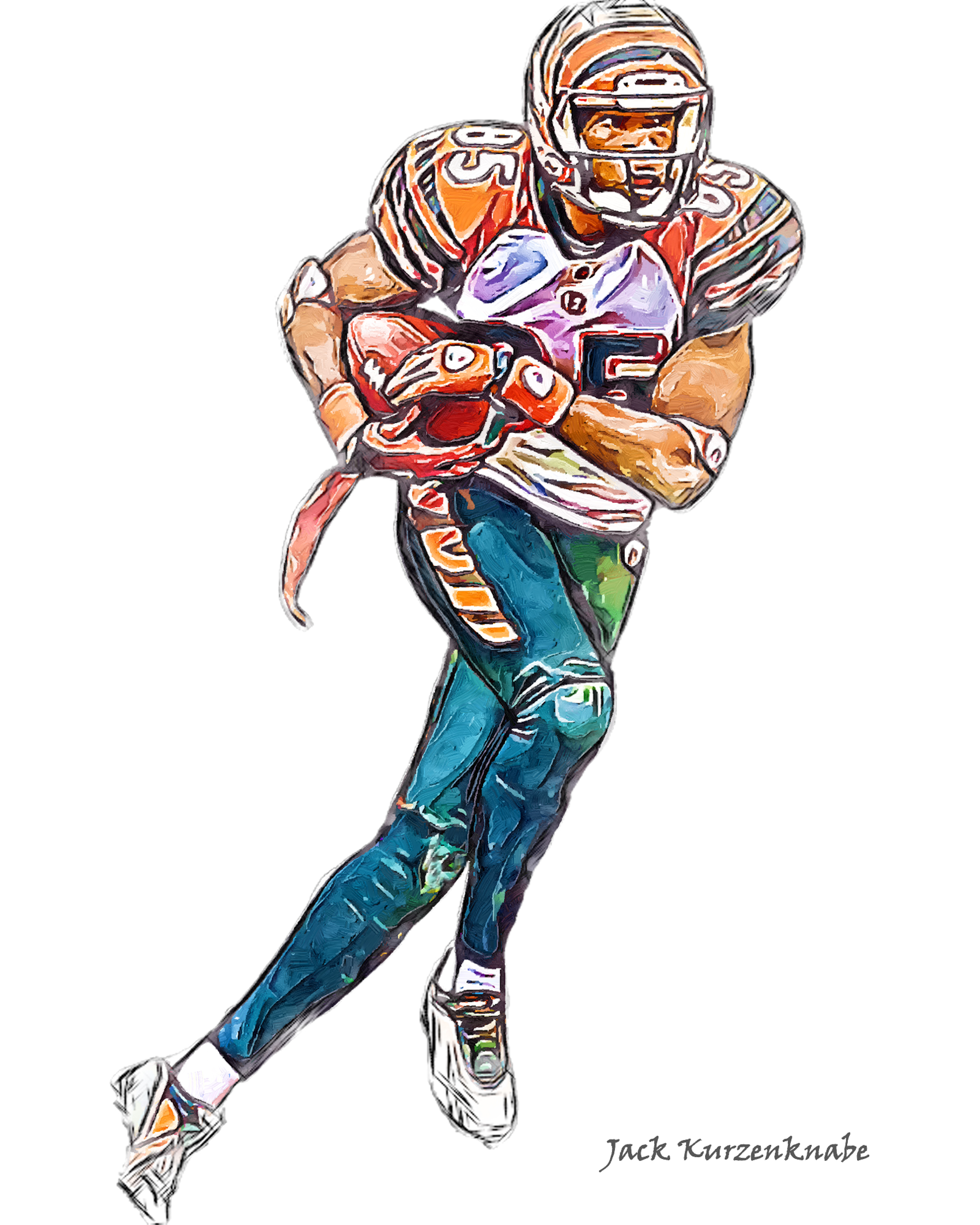 Despite an impressive initial showing, the Bengals were unable to maintain their lead and lost by three points. (credit: Courtesy of Jack Kurzenknabe via ickr) 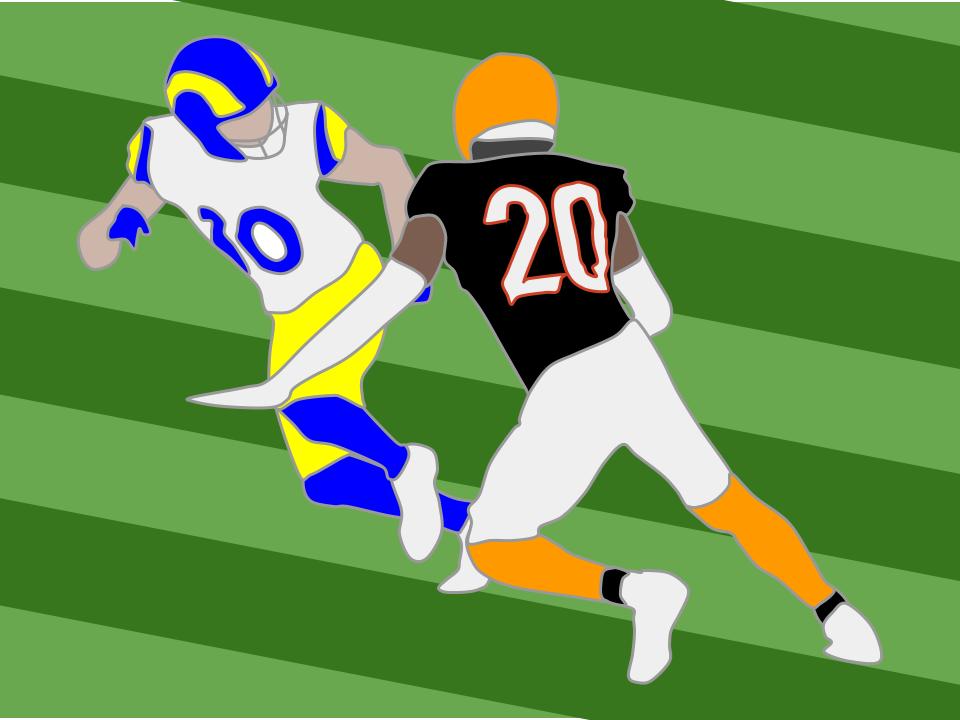 The championship game was a tense confrontation, with the Rams and the Bengals playing intently down to the wire. (credit: Cynthia Xu/Sports Editor)

When did people really start to believe in their hearts that the Los Angeles Rams would win this Super Bowl?

Not in 2016, when the NFL decided that the game would be played at their home stadium, figuring that the 4-12 Rams had no chance of playing for the championship within five years. Jared Goff was the team’s rookie quarterback, and he was struggling. Defensive tackle Aaron Donald was a lone bright spot, but the third-year pass rusher couldn’t carry the team alone. Head coach Jeff Fisher was so bad at his job that he was fired with only three games left in the season — and then his replacement lost all three left on the schedule. The NFL, determined to play the Super Bowl at a neutral site, rewarded this dumpster-fire of a team — in their eyes, the least likely to play for the Lombardi Trophy — with the rights to host five years down the line.

Not in 2017, when the Rams decided that the best solution to their coaching woes was a 30-year-old offensive coordinator from Washington, an eight-win team the year before; the same quarterback coach who had ruined second-overall-pick Robert Griffin III, the coordinator who had elevated Kirk Cousins and then started the train in motion which ended in him being shipped off to Minnesota. Baby-faced Sean McVay, who accepted the job at a press conference with his parents in attendance in the audience, and who had only been allowed to rent a car for five years, was not the answer to the Rams’ problems. It was a desperate try by a desperate bunch of cellar-dwellers.

Not after the 2018 season, when the Rams, having gone all-in to win Super Bowl LIII, managed just three points against Tom Brady’s mighty New England Patriots. McVay was certainly more impressive than anyone had bargained for, but his big bet — that he could win the league championship in his second season by trading up for big names — had fallen flat. Jared Goff wasn’t all he was cracked up to be, receiver Cooper Kupp was mediocre, and while running back Todd Gurley put together a thousand-yard season, he wasn’t enough to win the Super Bowl. It was a team with the building blocks to be great, but the problem was that 2018 was the Rams’ last year to compete for a championship. Goff, Gurley, and standout wideout Brandin Cooks would all be gone by the end of the next year.

Not after these Rams secured a 27-3 lead over Brady in the divisional round, and then threw it all away and let him march back and tie the game with just seconds left. Not a soul thought that the Rams had a snowball’s chance in hell. It didn’t matter that they dodged overtime, didn’t matter that new quarterback Matthew Stafford got a lucky break with seconds to go and kicker Matthew Gay won the game with no time left. This wasn’t a winning team.

And maybe a little bit of hope burst through the curtains when the Rams showed up to the 56th edition of the Super Bowl and came out to a 13-3 lead, only for holder and punter Johnny Hekker to bobble the snap, turn the ball over, and watch the Bengals come within one broken tackle of running it back for two points of their own, but it was gone when Tee Higgins broke free on the first play of the third quarter for a touchdown and a 17-13 lead. The catch wasn’t without its share of controversy; as he caught the ball, Higgins grabbed cornerback Jalen Ramsey’s face mask and pushed him to the side. The defensive back fell, and Higgins hurried down the sideline to put the Bengals in the lead.

After the teams traded field goals, the Bengals led 20-16 with five minutes left in the game. Then Matthew Stafford put together one of those drives that you don’t really expect out of a Lions’ product, but one that makes legends. From his own 37-yard-line, Stafford hit Kupp for eight yards, Brycen Hopkins for six, and Cam Akers for three. On second down from the Bengals’ 46 with three minutes left, Stafford came through — a wide-open Cooper Kupp hauled in a pass at midfield and tore down the field, gaining 22 yards to put the Rams within striking distance. Then, he did it again for eight more, and Akers found a larger-than-expected hole in the offensive line and pushed his way through, holding onto the football for dear life, and ending up at Cincinnati’s eight-yard line. The two-minute warning stopped the clock.

Across the country, fans — even those with no ties to Los Angeles or Cincinnati, even those with no stake in either team — were on the edge of their seats. Coming out of this game, there would be a fairy tale story, one way or another. If the Bengals’ defense stopped the Rams, Joe Burrow, their young quarterback, would kneel out the clock, and the Bengals would have a hero’s welcome when they got back to Ohio. If the Rams scored a touchdown, Stafford would finally get his ring, Donald would get his, McVay would get his, and the turnaround would be complete. Stafford would never again have to buy himself a drink in Los Angeles, McVay would have a job for as long as he wanted it, and Donald — like he always talked about — would be able to let his daughter play in the Super Bowl confetti. And if Los Angeles scored, and then Burrow struck back? A new great would be born, and talks of dynasty would be in the air.
Los Angeles had four plays to bring down the house.

Two plays to save the season.

There was almost certainly a split-second after the pass hit the ground where it crossed Sean McVay’s mind to look for Johnny Hekker, the holder who’d bungled the snap on the extra-point attempt in the second quarter, and strangle him. Instead of 20-17, the score was 20-16; instead of being able to kick a game-tying field goal, it was fourth down and all the marbles for Matthew Stafford.

Except … except it wasn’t. The scoreboard still read third-and-goal, and a single flag was on the field. Granted, there was reason to believe there was a flag on the play. Before the snap, the Rams’ entire offensive line — every single member but the center — had false-started, but the referees somehow missed it. Instead, Bengals linebacker Logan Wilson was called for defensive holding, stopping Cooper Kupp from getting open and forcing the incompletion. At worst, it was borderline; most of the time, the call would never be made; by contrast, the false start would be called nine times out of ten. But it wasn’t, and the holding was, and the Rams had a free set of downs from the four-yard line.
Incomplete pass, second down.

And then, touchdown. Cooper Kupp took a pass to the right side of the end zone, and the crowd went wild. But before the Rams could even start celebrating, flags coated the field. Again. And this time, although there was an unnecessary roughness penalty on Bengals’ safety Vonn Bell, the one that crippled the Rams’ energy was a holding penalty. The penalties offset, and it was first down again.

Except somehow, this wasn’t for real, either. After holding onto their flags all night long, the officials penalized Eli Apple for pass interference in the end zone, again on an attempt to Kupp. It was first-and-goal, for the third time on the drive.

On first down, Stafford dove up the middle for no gain, and on second down, he found Kupp in the end zone for the second time in three plays. The star receiver looked around at the ground. There were no flags. He looked back at his quarterback, and he looked at Apple, lying flat on the ground after trying to make a play. Lastly, he looked at the football. Then pandemonium broke out, and the Rams allowed themselves to hope. Finally, someone believed. The whole country, it seemed, believed.

But they’d left Cincinnati a minute, twenty-nine seconds, and two timeouts — Burrow was ready to go to work. After a touchback, in two plays, he moved the Bengals 26 yards with throws to Ja’Marr Chase and Tyler Boyd to the Rams’ 49. The Bengals had a lot working in their favor. Their rookie kicker, Evan McPherson, had been nearly perfect on long kicks, with a longest kick of 58 yards, and no field goal misses — 14 for 14 — during the playoffs. All Burrow needed was another ten, maybe fifteen yards, and they could tie the game. But on second down, he went for broke, throwing it deep downfield on a route that Chase gave up on.

On third down, running back Samajge Perine seemed to find enough of a hole for the first down, but Donald came through. Knowing his season, his championship, and his dream rested on stopping the Bengals from getting this first down, he grabbed Perine, tackling not his body, but his arm — the one carrying the football. This play stopped Perine from extending the football out past the line to gain, and Donald managed to stop Perine just half a yard short of the first down. It’s not an understatement to say that this heads-up play may have saved the Super Bowl for the Rams.

For both of these teams, everything came down to this play. Convert, and likely give McPherson the chance to tie the game up — given how reliable he’d been, that seemed likely. Fail to pick up the one yard, and watch Stafford kneel down and watch blue and yellow confetti rain out of the sky. Burrow dropped back to pass, and the Rams charged. Ja’Marr Chase, meanwhile, was wide open on the left sideline, having dusted his coverage. If Burrow had looked left, he would have put the Bengals on the Rams’ 45, maybe the 40, with a fresh set of downs and enough time left to either score a touchdown or put McPherson in field goal range.

But by the time Joe Burrow looked to his left and cocked his arm to fire it to Chase, he had company in the backfield. The Bengals’ offensive line had chosen absolutely the worst play to implode. Left guard Quinton Spain put up no resistance as Donald ran around him to the left, and within two seconds of the ball being snapped, he had his arms around Burrow, turning him around so he couldn’t get the ball to Chase. As Donald brought him to the ground, Burrow flung it in desperation, the ball careening end-over-end through the air. It seemed to hang there forever.

As luck would have it, Perine was there. But, caught flat-footed after Burrow had looked to Chase, he wasn’t ready for the throw, and couldn’t get to the football. As it finally hit the grass, Donald jumped up, a look of pure jubilation on his face, tapping his ring finger. It didn’t take a genius to find out what he was saying — finally, he would have a ring. Burrow could do nothing but walk off the field with his head hung, while McVay, on the sideline, had his smirk wiped away by his massive defensive tackle’s hug, and as the clock struck all zeroes, the Gatorade shower that awaited him.

And then, finally, everyone believed in the Los Angeles Rams.