Letter to the Editor: More than a 'Borderland' 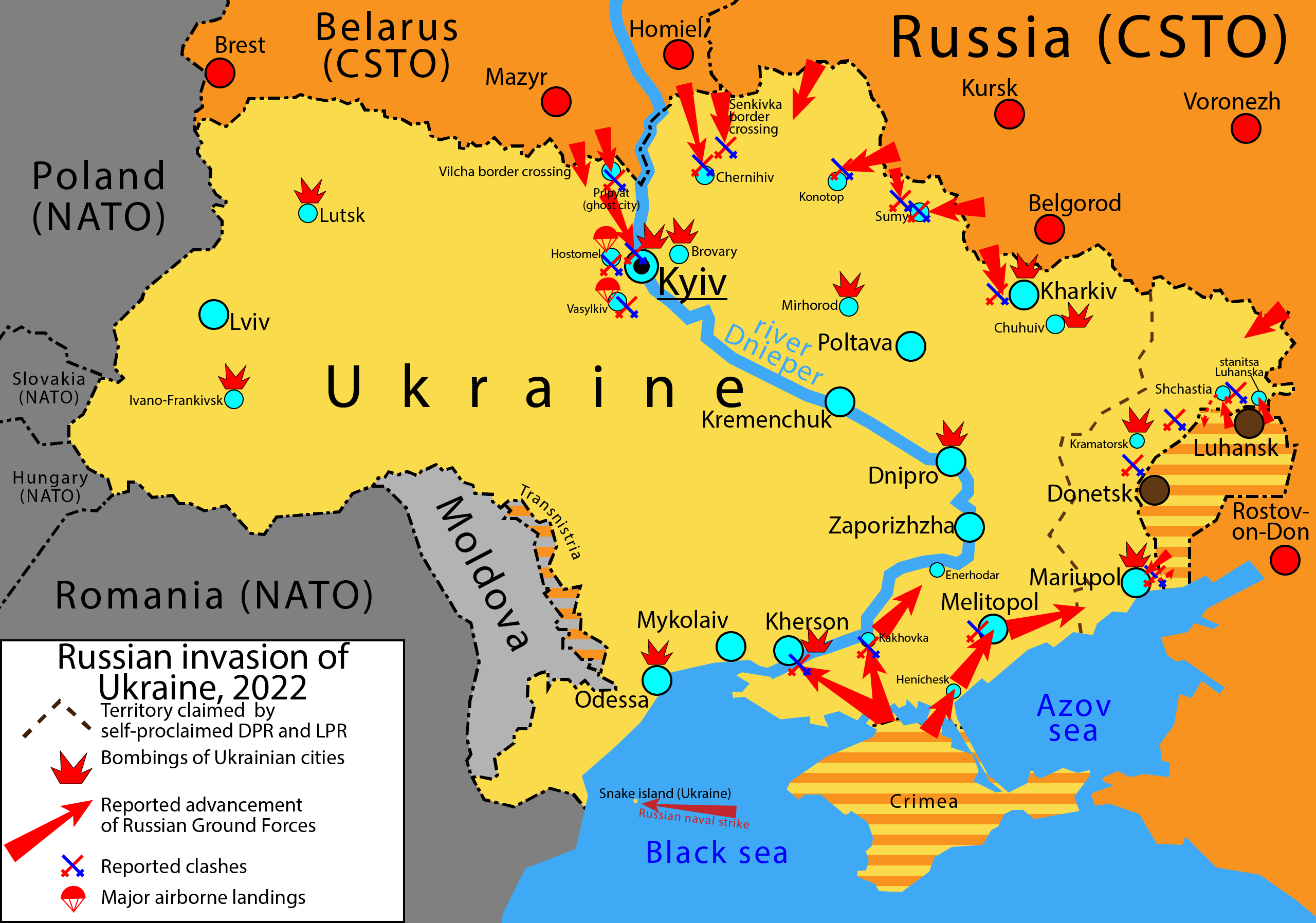 Credit: Courtesy of Homoatrox via Wikimedia Commons
Editorials featured in the Forum section are solely the opinions of their individual authors.

Ukranians were jarred awake at 4 a.m. local time by the trembling of tanks and the explosions from rockets, as the Russian government dropped all pretenses and launched an invasion of their smaller neighbor. Troops entered from the previously annexed Crimea, aiming for Mariupol in the South and Belarus from the North, to conquer the capital, Kyiv. Battles have begun in other areas, including the rather ominous region of Chernobyl. The existence of the Ukrainian state may soon cease, and as the international community watches on, the question emerges: "Why did this conflict, and its four-month-long build-up, arise at all?" If you look at speeches from Putin, you will get answers ranging from “the denazification of the country” to anger at the fact that NATO “encroaches on Russian borders”; however, the true answer is found from a rambling speech he gave a couple of days before the invasion, reiterated once again during the declaration of war, where he stated that Ukraine never really “existed” and instead is rightfully a province of Russia. One may question the merit of these claims, and, unsurprisingly, they have no merit whatsoever.

What would become Ukraine during early antiquity was a site where Greeks, Slavs and — later during classical times — Romans and Proto-Iranians (Cimmeranians, Scythians, etc.) interacted. During the early medieval era, the Hunnic and Turkic migrations greatly reshaped the east of the region that would later be Ukraine, while new groups of Slavs migrated from Carpathia (around modern-day Romania) into the Northern and Central part of the region. This arrangement was upended by the exploits of the Varangian Rurik and his Slavic viking syncretic state the Kievan Rus. Occupying the Dnieper influenced a choke point between the Baltic-Byzantine trade route, this quasi-tribal meritocratic trade federation became the major power in eastern Europe, ruling from the Baltics to Crimea, and the concurrent source of pride for both Ukrainian and Russian nationalists. Trade shifted, steppe wars weakened the polity, and the Mongols brought the death knell to the Kyivans with the synecdochic city’s sacking in 1240.

After the Mongols fractured in the 14th century, Poland and Lithuania (which united soon after) and the Crimean Khanate divided the region amongst themselves, sparking a period of foreign rule within the region. Migration into the region began from Poles, Armenians, Germans, and Jews. Regional autonomy waned, as the Polonization of the Ruthenian (pre-Ukrainian) nobility began to occur, which along with the deterioration of the peasants' conditions, caused discontent within the region. The most interesting consequence of this was the failed attempt to reconcile local Orhtodox traditions with the Polish promulgated Catholic Church, and the rise of another set of powerful horsemen, the Cossacks.

Arising from the south of the Dnieper in their Sich (stronghold), now referred to as Zaporizhzhya, these “adventurers” were peasants tired of subjugation and disaffected wanderers from the nobility and burgher classes, who signed agreements of mutual protection with local nomadic groups (i.e. Cuman descendants) and one another, and elected their local leader, or Hetmans. These Cossacks fought against Tartar invaders, and for their democratic values against the encroaching monarchical authoritarian Muscovian Grand Principality (who would later become Russia). They joined the Orthodox brotherhood of Kyiv in 1620, and sparked a cultural revival that would lead to the Kyvian Mohyla Academy’s establishment, Ukraine First University. Khmelnytsky, a Cossack Hetman, caused a major war within the region in order to redress his grievances with the Polish Monarchy. In the process he established the roots for an independent Cossack-headed Ukrainian state, but incompetence from his successor would lead to the partition of the region between the Left and Right Banks of the Dneiper. While the Left Bank closed in on Muscovy, and saw it as “Little Russia,” the Right Bank tried to remain independent, before succumbing to Poland, and later Russia, who took all of Ukraine after late 18th Century Polish partitions.

Russian domination over Ukraine would cause the rise of the city of Odessa, intermigrations from other parts of the empire, the disastrous Crimean war where Western Europe decided to stop the expansion of Russia into Ottoman Crimea, and failed Russification, as a 19th Century Cultural Literature movement spurned ideals of Ukrainian nationalism. After the Russian Revolution, Ukraine refused to acknowledge Soviet authority until subdued in the ‘20s. Afterwards the Lenin New Economic Policy allowed a limited recovery of Ukrainian prosperity, which was completely undermined and destroyed by the Soviet genocidal Holodomor and the Nazi invasion. Kruschev ceded Crimea to the Ukranians in the ‘50s, and as the Soviets weakened, Ukrainian nationalism strengthened. So, once the empire collapsed, the Ukranians were free once more. However, after ceding their nukes for Western protection, corruption and oligarchical machinations stymied the nation, and kept it hamstrung between the eastern European and Western spheres, until Russia’s current invasion.

It is clear that Ukraine has a clear history of independence, expansion, subjugation, and rebellion. Thus, claims that it is just a borderland (as its name translates to) are completely fallacious. However, Putin and other nationalists like him care little for historical accuracy. Whenever he claims that he is fighting the Ukrainian Nazis, he is gaslighting and attempting to distracting from the fact that his casus belli is spurious. Nationalists only like a narrative that fits them, not a critique of their misdeeds, but as the common aphorism goes, those who fail to understand history are doomed to repeat it.

Ruel Beresford is a CMU alumnus with a bachelor of science in Biological Sciences and International Relations and Politics, and is a current graduate student at the University of Pittsburgh pursuing a master's degree in Public Health.