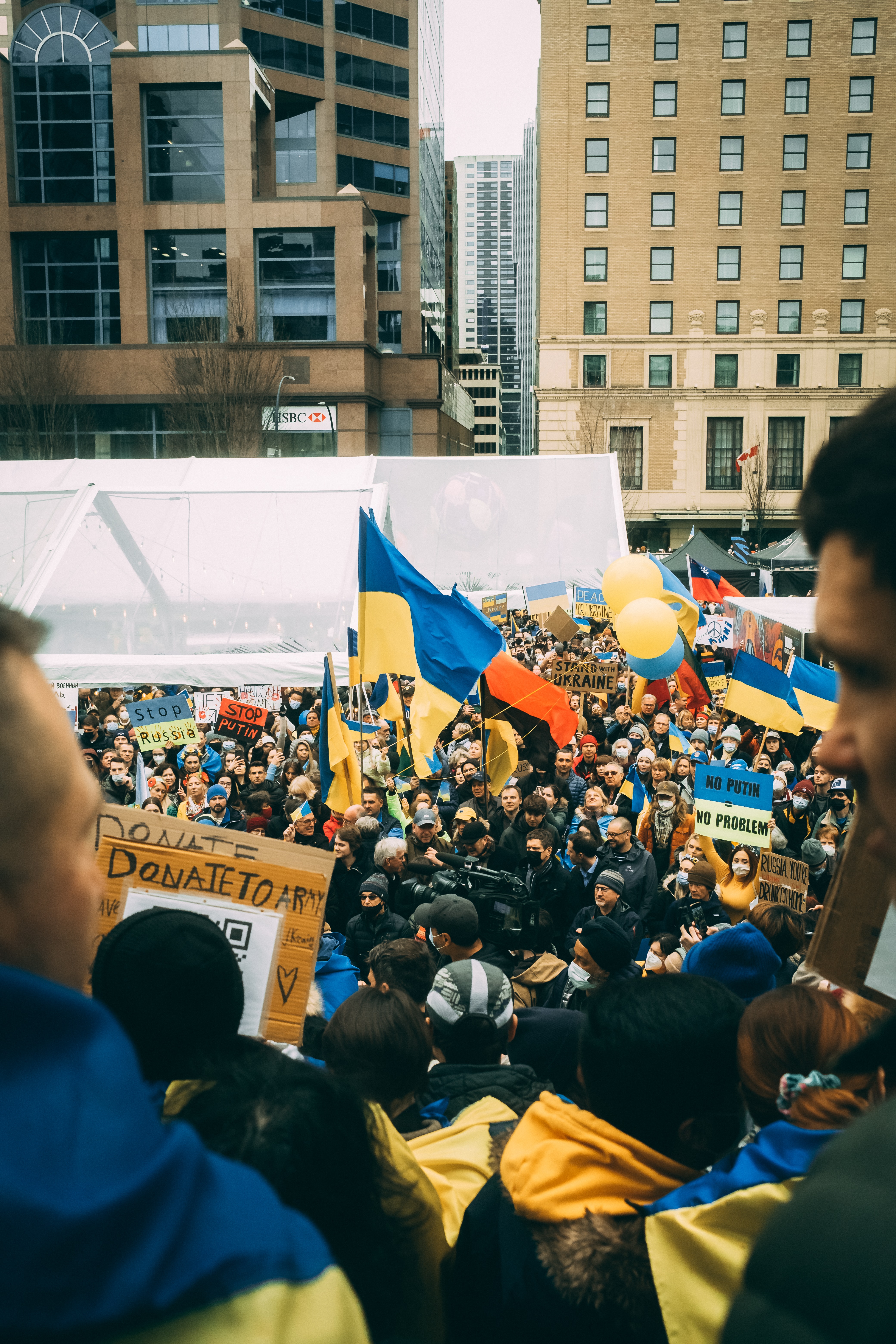 People over the world are responding to Russia’s invasion of Ukraine, taking to social media, but social media and tech companies don’t always know how to respond to the in ux of information and misinformation. (credit: Courtesy of Bruno via Unsplash)

When an event on a global scale occurs, its effects can be felt everywhere and in every sector, including science and technology. This week's SciTech Roundup features stories around the current war in Ukraine.

The White House, Canada, the European Commission, as well as several other European countries have announced that they will be expelling Russian banks from the Society for Worldwide Interbank Financial Telecommunications (SWIFT) Banking system. SWIFT is a cooperative that facilitates trillions of dollars of transactions between more than 200 countries. Though Russia has an alternative network, the System for Transfer of Financial Messages, it is limited in its capabilities. Cryptocurrencies do not require a bank and could potentially help, but are not as commonly used as Russian banks, and would likely also not be able to replace SWIFT. As such, without SWIFT, many Russian corporations and other entities would have to manually confirm financial transactions, significantly slowing down the economy.

Nations are anticipating possible problems that could arise with expelling Russia from SWIFT. Russia has a large economy, and slowing it down could have spillover effects on other nations. Because of this, the restrictions on Russia in SWIFT are lighter than some countries have proposed. In addition, nations worry that by expelling Russian banks, Russia will turn to their alternatives, and even if they are not adequate replacements right now, having to use them will strengthen the systems.

These reasons have prevented nations in the past from expelling Russia, though in this case they are unable to turn a blind eye to Ukraine's plight. In the past, the only other nation that has been banned from SWIFT is Iran.

Social media and tech companies respond to the crisis

Social media and tech companies have been grappling with how to respond to crises: elections, the pandemic, the Black Lives Matter movement, and now, Russia invading Ukraine.

Ukrainians are taking to social media to show live updates of the crisis, sharing photos, videos, first-person accounts, and trying to show the scale and impact of the invasion. But as these messages circulate, misinformation and disinformation follows. Videos from years ago are posing as current takes, and propaganda abounds.

On Twitter, the verified account for Ukraine posted: "hey people, let's demand @Twitter to remove @Russia from here ... they should not be allowed to use these platforms to promote their image while brutally killing the Ukrainian people @TwitterSupport." Twitter has not responded. The head of Ukraine Ministry of Digital Transformation has also requested on Twitter for Apple to cut off Russia from its services.

Twitter is stopping advertisements in Ukraine and Russia. Google Europe said it was enhancing security controls for Ukranian users. Facebook/Meta is allowing Ukrainian users to lock their profiles, and has placed limitations on four Russian media accounts. The companies are also adding features to flag misinformation or potentially sensitive content and curating resources of verifiable information.

Russia is also responding to the actions of social media companies. After Facebook placed limitations on Russian media accounts, it announced on Feb. 25 that it would be "restricting access" to Facebook, though the extent and nature of these restrictions are currently unknown.

As cyberattacks escalate, archivists are trying to save Ukraine's web pages

Cybersecurity firm ESET claims that a data-wiping program was installed on hundreds of machines in Ukraine, including a government website and a financial institution, in an attack that had likely been in the works for a while.

Experts studying the data-wiping malware found that in order for the cyberattacks to work, the malware creator needs to already have admin access to the computers in the network. This means that the computers had already been compromised long before the attack. The attack's primary function was likely to incite panic.

Ukraine claims that it is part of a wave of Russian cyberattacks on the country. In recent weeks, the government has been reporting distributed denial of service attacks on banks, phishing attacks on public authorities, and the spread of malicious software.

In addition, notorious ransomware gang Conti announced its support of Russia. It said that it would respond to a cyberattack on Russia with "all [its] possible resources to strike back at the critical infrastructures." It should be noted, however, that Conti has made similar bold claims in the past.

It's also worth noting that countries are also incentivized to destroy documents during times of war in order to evade being prosecuted for war crimes, which adds to the urgent need to preserve Ukraine's webpages. Archivists have been selectively web crawling Ukraine media and government websites as Ukraine experiences political upheaval.