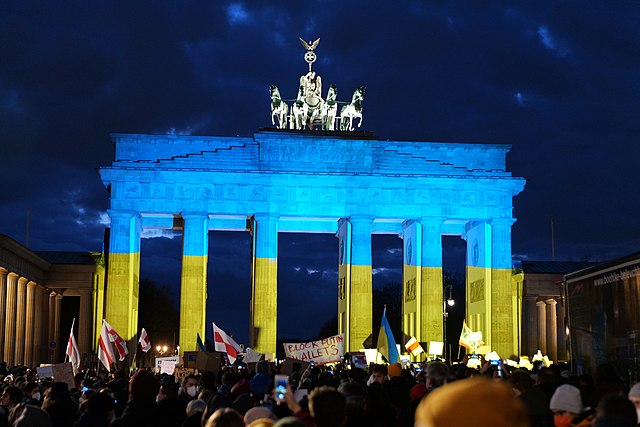 Russia’s invasion sparked international responses. The Brandenburg Gate was lit with the colors of the Ukrainian flag. (credit: Courtesy of Leonhard Lenz via Wikimedia Commons) 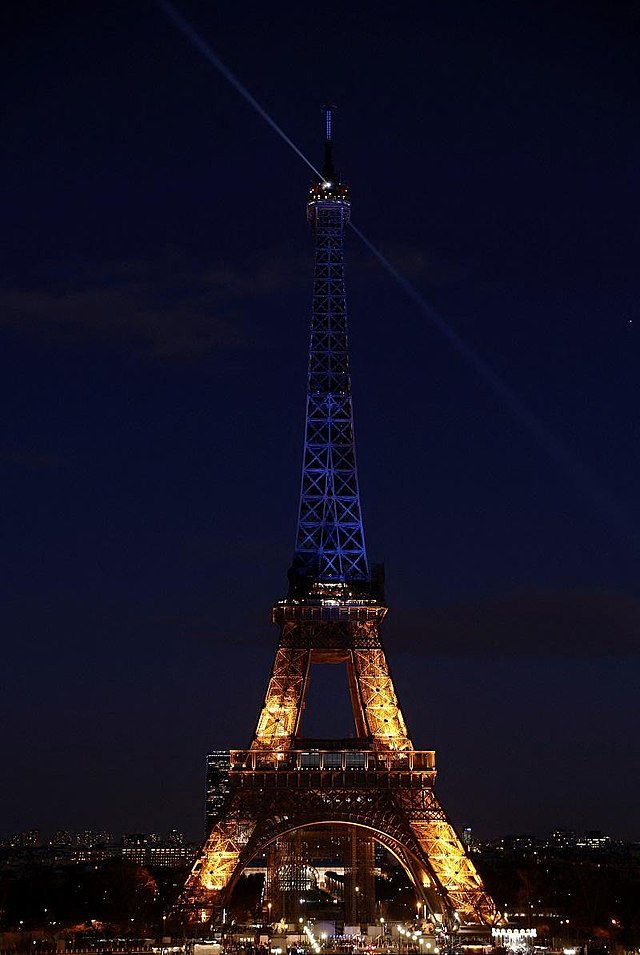 In Paris, home of the Stade de France, the Eiffel Tower was lit in solidarity. (credit: Courtesy of Raphael Krawzyk/Andalou Agency via Wikimedia Commons) 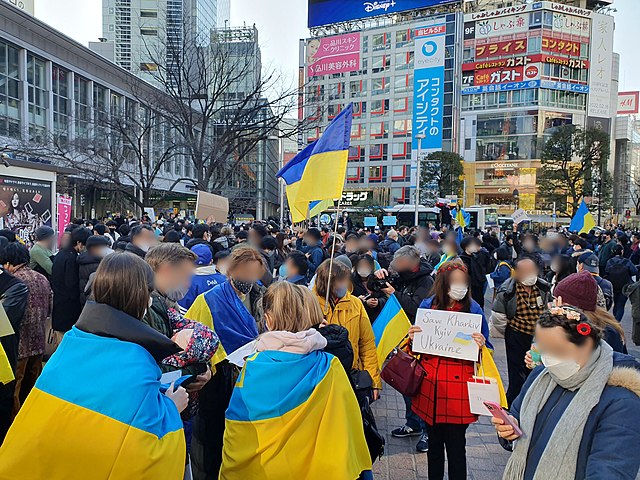 Protestors in Japan took to the streets, gathering in Hachiko square in Shibuya, Tokyo, with signs, flags, etc. (credit: Courtesy of Syced via Wikimedia Commons)

Faced with Russia’s invasion of Ukraine last Thursday, many facets of the sporting world, ranging from athletes to committees, have mounted strong responses in condemnation of Russia and in solidarity with Ukraine.

The soccer world was among the quickest and most vocal. On Friday, the Union of European Football Association’s (UEFA) Executive Committee announced that the Champions League final, which was slated to be played in the Gazprom Arena in St. Petersburg, would be relocated to the Stade de France in Saint-Denis. The UEFA Executive Committee stated::

“UEFA wishes to express its thanks and appreciation to French Republic President Emmanuel Macron for his personal support and commitment to have European club football’s most prestigious game moved to France at a time of unparalleled crisis. Together with the French government, UEFA will fully support multi-stakeholder efforts to ensure the provision of rescue for football players and their families in Ukraine who face dire human suffering, destruction and displacement.”

All of the clubs and national teams hailing from Russia and Ukraine which are competing in UEFA competitions must play home matches at neutral venues. In addition, UEFA is expected to end its 40-million-euro sponsorship deal with Russian state-owned gas company Gazprom in the near future. Although UEFA is in discussion with its legal team regarding the severance, Gazprom advertisements must still be aired in the meantime.

After the decision, Kremlin spokesperson Dmitry Peskov was quoted as saying, “It’s a shame that such a decision has been made,” and “St. Petersburg could have provided all favorable conditions to hold this festival of soccer.”

Polish Football Association president Cezary Kulesza took to Twitter on Saturday, stating, “In light of the escalation of the Russian Federation’s aggression against Ukraine, the Polish national team is not going to play a match against the Russian Republic.” He declared: “This is the only right decision.”

Later that same day, the Swedish Football Association followed suit, releasing a statement reading, “The men’s national team will not play against Russia — regardless of where the match is played. The Federal Board also urges FIFA to cancel the play-off matches in March in which Russia participates.”

On Sunday, the Executive Committee of the Czech Football Association made a similar decision, proclaiming that “the Czech FA executive committee, staff members and players of the national team agreed it’s not possible to play against the Russian national team in the current situation, not even on the neutral venue.”
Teams at the domestic level have taken action as well. German club Schalke 04 were among the first to respond, announcing their decision to remove the logo of main sponsor Gazprom from their jerseys less than 12 hours after the initial invasion.

Shortly following the U.K. government’s ban on the operation of Russian national airline Aeroflot within its borders as part of its sanctions on Russia, a Manchester United spokesperson stated stated that, “in light of events in Ukraine, we have withdrawn Aeroflot’s sponsorship rights. We share the concerns of our fans around the world and extend our sympathies to those affected.”

Across the top two tiers of Spanish soccer, messages of “No a la guerra” (“No to war”) were displayed in protest of Russia’s invasion of Ukraine.

Soccer is not the only sport that has mounted responses against Russia. The Russian Formula 1 Grand Prix, which was scheduled to take place on Sep. 25 in Sochi, was canceled by the Fédération Internationale de l’Automobile (FIA), who declared that they are “watching the developments in Ukraine with sadness and shock” and that “it is impossible to hold the Russian Grand Prix in the current circumstances.”

The International Basketball Federation (FIBA) postponed the Netherlands-Russia game slated to be played (as part of the FIBA Basketball World Cup 2023 European Qualifiers) on Sunday, as well as the Great Britain-Belarus game scheduled for Monday. The U.K. Home Secretary, Priti Patel, canceled the Belarusian Men’s Basketball Team’s visas, but received significant backlash online from those who pointed out the futility of the gesture while the U.K.’s borders remain firmly closed to Ukrainian refugees](https://www.businessinsider.com/boris-johnsons-government-resists-call-for-uk-to-home-ukraine-refugees-2022-2).

In addition, the International Ski Federation (FIS) has canceled all remaining events of the 2021-22 season that Russia was scheduled to host. The Norwegian Ski Federation, which will host multiple alpine and cross-country skiing World Cup races, and who will co-host the Nordic ski disciplines’ junior world championships, stated, “The Norwegian Ski Federation’s message to Russia and Russian athletes is crystal clear: We do not want your participation.”

The Association of Tennis Professionals (ATP) postponed The Association of Tennis Professionals (ATP) postponed the Moscow CH 80 tournament indefinitely but has not made a formal statement regarding the invasion and has not officially canceled the event. Within the sport of tennis, however, many players have taken strong stances. Current world number one Russian Daniil Medvedev declared that he is “all for peace” and wants to “promote peace all over the world.” Fellow countryman Andrey Rublev signed “No war please” on the camera lens following his victory in the Dubai Open (players often sign the camera lens following a win). Ukrainian star Elina Svitolina has also spoken out in support of her home country:

“I decided that the prize money from my upcoming tournaments here in Mexico and in the States will go to the Ukrainian Army and to humanitarian needs. So like this, I can help my country. And this, I think, is the right thing to do at the moment. And I want to do something and to help my country. To the people in the world, I would say to try to understand that we’re losing innocent people, we’re losing soldiers and we’re constantly under attack. I want them to go on the streets to join people outside, try to bring attention and do what they can for our country to stand with Ukraine.”

With the both the 2022 World Junior Swimming Championships and the 2022 World Short Course Swimming Championships set to take place in Kazan, Russia, the Ukrainian Swimming Federation has petitioned the Fédération Internationale De Natation (FINA) to relocate these competitions. Nine Nordic aquatic federations have joined Ukraine, declaring that they will not compete in any event staged in Russia or Belarus. Although FINA has not made a formal public announcement on how they intend to proceed, information reportedly leaked by the Danish Swimming Federation suggests that the organization has already decided to relocate the aforementioned championships.

Although it has yet to take any formal action, the International Olympic Committee (IOC) asked sporting bodies on Friday to relocate or cancel all upcoming sporting events set to take place in Russia and Belarus, as well as to cease using their flags and national anthems. The IOC condemned the two countries’ breach of the Olympic Truce established prior to the Beijing 2022 Olympics — that a general truce should be observed seven days before the opening of the Olympic Games (Feb. 4) until seven days after the closing of the Paralympic Games (March 13). Despite calls to sanction Russian and Belarusian Paralympic Committees, however, the IOC have not taken tangible action against either party.

Though athletic sanctions and relocations of events may not have major political impact, the response of the sporting world to Russia’s invasion of Ukraine is critical nonetheless. Sport is a medium through which individuals and countries have engaged each other for centuries. Sporting events today are the subject of significant viewership, with events such as the UEFA Champions League garnering hundreds of millions of viewers. As such, it is the responsibility of athletes, but especially of sporting federations, committees, and organizations to take hold of what power they have — regardless of the degree of actual influence they have — and act.