Pirates, week 2: Nice while it lasts 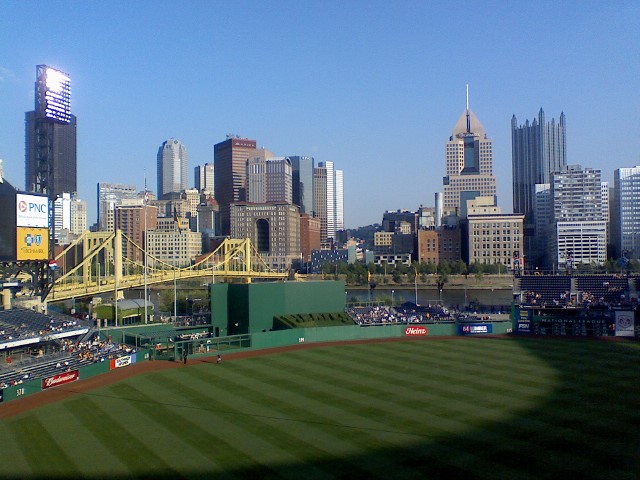 Week 2 for the Pirates went far better in comparison to week 1. If the Pirates can keep it up, their season may not be as dismal as it seemed last week. (credit: Courtesy of Kgreenw7 via Wikimedia Commons)

Game 3: win, at St. Louis, 9-4
The Pirates closed the series out in St. Louis with a win, and it was a dominant one. It looked like the Cardinals were heading for a sweep when they put three men across the plate in the bottom of the first. But in the top of the third, the Pirates loaded the bases, and in a rare example of clutch play, Michael Chavis hit it out of the park for a grand slam to give the Pirates the lead. Before the inning was over, they’d tacked on one more. They added two more in the fourth, chasing starter Stephen Matz from the game before a single man was out, and the rout was on. The Bucs cruised to their first win of the season, lighting up the board for fifteen hits. Miguel Yajure worked the fifth and sixth innings in relief, allowed no runs, and was credited with the win.

Game 4: loss, vs. Chicago, 2-1
The home opener at PNC Park is always an exciting day because it’s the only time the team fills the park. José Quintana was on the mound for Pittsburgh and threw a beautiful game while being the first Pirate all season to make it to the sixth inning; Drew Smyly pitched five scoreless innings. Chicago drew first blood when Seiya Suzuki went deep in the fifth and then did it again in the seventh, making it a 2-0 game. But it looked like a comeback was possible when Brian Reynolds hit another solo shot in the eighth, cutting the deficit to one run, and when Kevin Newman crushed one with two outs in the bottom of the ninth, it looked like we were going to extras. But the wind had other ideas, and the ball settled into Ian Happ’s glove at the warning track to seal the win for Chicago.

Game 5: win, vs. Chicago, 6-2
After losing the opener to the Cubs in large part because of an inability to provide the pitching staff with run support, the offense exploded early in this one. A Wilson Contreras shot made it 1-0 Cubs, but in the bottom of the inning, Ke’Bryan Hayes beat out an infield single, Yoshi Tsutsugo walked, and Ben Gamel hit it out of the yard to put the Pirates up two. Then, in the third, the Pirates did it again; Hayes hit a scrappy double, Gamel walked, and Kevin Newman made up for his almost-heroics the day before by beating out a triple to score them both. Hayes went four-for-four, and he’s on a hot streak, having gone nine for 17 since the opener. Each team would score once more in the fourth, and that did it for the runs, with the Pirates taking their first home win of the year to split the two-game series.

Game 6: win, vs. Washington, 9-4
It’s not often that everything comes together for the Pirates, but when it does, it can be beautiful to watch. After the Nationals scored one run on a hit and two on an error, Daniel Vogelbach hit the Nationals’ third pitch of the game over the fence. Then in the third, Reynolds — who has been terrific to start the season — hit a two-run homer to tie the game at three, and after hits by Tsutsugo and Gamel, Newman doubled them both in before being caught trying to stretch it into a triple. Later, reliever Roansy Contreras would pick up the win while allowing only one hit and fanning five in three innings of relief, and he earned every bit of it. His pitches were breaking up, down, inside, outside, all over the place, and the likes of Juan Soto were left flailing aimlessly at the baseball. At the plate, Vogelbach went four-for-six, while Tucker broke out of his slump to go three-for-five. Pittsburgh has now won three of their last four and sits a game behind the Cubs in the NL Central standings.

Game 7: loss, vs. Washington, 7-2
This was the first game all season that the Pirates have been really, truly, badly outplayed. Starting pitcher Mitch Keller, billed before the season as a possible all-star, gave up four hits and two runs before registering a single out in the top of the first; he ultimately got out of the inning by leaving the bases loaded. Washington added another in the second, but Hoy Park knocked home his first two runs of the season to pull within one. After that, though, we were treated to classic Pirate baseball — the team never really threatened again, and the Nationals scored four more runs to make it seven to two by the end of the game.

Game 8: win, vs. Washington, 6-4
The Pirates put it all together on Saturday, giving them a chance to win a series for the first time in the young season. (The team went 1-2 against the Cardinals, 1-1 against the Cubs, and is ahead 2-1 against the Nationals.) The Nationals started strong with a run in the second, but the Bucs got them both back in the bottom of the frame; Juan Soto struck back for the Nationals with a solo shot to tie the game 2-2. But their defense couldn’t escape the inning without allowing another run, and a messy fielding play by Washington in the eighth inning allowed the Pirates to take a huge 6-2 lead. Washington clawed two back in the top of the ninth inning, but they couldn’t finish the comeback. Michael Chavis brought his season average to .500 with a three-for-four night, Ke’Bryan Hayes went two-for-four, and Cole Tucker knocked in his first run of the season as reliever Dillon Peters picked up his second win.

Bottom Line:
The Pirates played well this week, and made up for the abomination of a first week that they had. The hitting’s been good, the pitching’s been okay, and they’ve put it all together when they’ve had to. Right now, they’re playing like a team that deserves to sit in the middle of the pack, and that’s exactly where they are: a game and a half behind the Cardinals and half a game behind the Cubs. How long this goes on, only time will tell. It could end next week, it could end in May, or this team could by some miracle finish at .500. But however it goes down, Pirates fans, let’s enjoy it.